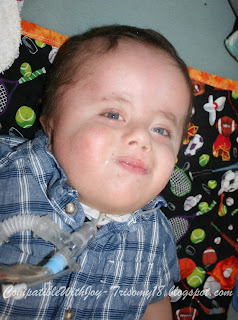 The house is starting to stir around here.  It's a summer Sunday morning and I've been up for an hour and a half because my nurse's shift was over, but most of the rest of the house kept sleeping.  Lots of time for thinking.

I've been sitting here listening to Aaron breathe.  Breath, such a simple, vital action.  So peaceful to listen to when it's going well.  So terrifying when it's not.  This morning was a good one.  He was off the ventilator for almost an hour, the first time in a few months we've tried it.  And he did so well!  In fact, so well that I tried to put his speaking valve on him.  Um, well, maybe a bit too much.  Silly monkey decided he couldn't remember how to breathe out on it, how to push the air past his trach to his mouth and nose.  The funny part is that he was vocalizing just before, and quite a bit afterwards.  In other words, he was doing just what he needed to do with the speaking valve.  That's okay, he'll figure it out again sometime.  No rush.


There are a lot of changes and things coming for Aaron.  This week we start our rounds of biannual visits for most of his specialists.  He sees the orthopedic doctor at Shriners on Monday for follow-up on his scoliosis and his foot surgery.  Tuesday, he sees his endocrinologist for follow-up on his thyroid.  Wednesday is the all-you-can-eat, blue plate special where we see the ENT, pulmonology, special needs and probably dietary as well.  At least it's all in one day, in the same room.  But it makes for a long day. 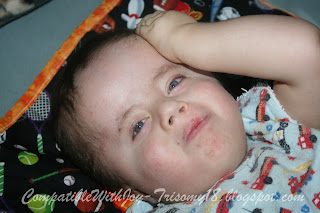 Then the next week, we start with a new nursing company.  That's got me a little bit nervous.  New things are always a bit scary, but I think it's going to be a good move.  Plus, I have his IEP scheduled for school mid-July.  Yeah, my little man starts school this fall.  It's crazy!  I only sent two of his olders to preschool.  They were four and that was three days a week and it was because they needed to get a jump on reading.  Both boys are red/green colorblind and needed to be able to read those crayons and markers to know what they were using.  Aaron is three, developmentally about six months, and will probably be attending five days a week.

Deep breaths here, but I think we've got it.  I went down to his school last winter and took a tour.  It is going to be amazing.  There is just no way that I could come close to duplicating what they can do with their equipment and training here at home.  And I owe it to my little man to help him grow and develop to his fullest potential, just like his siblings.  But it may be a little harder to let him go.

So that's what's happening in Aaron's life right now.  I'm still a bit worried about his heart, but that's nothing new.  I think I always will be.  He's doing better overall with his reduced calories.  I think it may just take time to get everything back in balance.  As I'm typing, he's in there blowing bubbles and cooing to himself.  Yeah, without that speaking valve.  Doing just exactly what he needs to do to breathe with it.   That's okay, as I said, he'll get it figured out.  He's been doing the "impossible" for his whole life.  I don't see a reason for that to change.


The difference between the impossible and the possible
lies in a person’s determination.
–Tommy Lasorda
Posted by CompatibleWithJoy at 8:50 AM