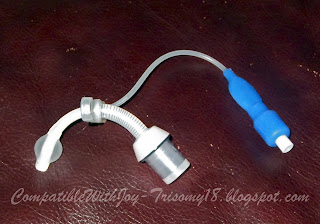 Um, yeah, except trach changes aren't much fun.  At least not for us, not me, not Aaron.  So like anything else I don't want to do, I tend to try to put it off, forget about it, try anything and everything else first.

Last week I said I was pretty comfortable where we were here at home.  He was sick but we were managing it.  And by Sunday, we weren't seeing much "sick" anymore.  But his oxygen, it's been really weird.  Like he does great on one to two liters when he's asleep.  Awake?  Well, that's another story.  Like a story with six to eight liters of oxygen in it.  I adjusted some more vent settings, (this time without permission, shhh, but watching his parameters to make sure he was still within safe limits).  It might have made a small difference, but really, not much.

Then this morning (or late last night? I can't remember) I realized that his cuff wasn't holding any air.  Like, none at all.  I would fill it up, pull the syringe off, and it would deflate.  All. The. Way.  Yeah, I don't think it was helping much.  So when he was awake this morning, I bit the bullet.  It was right after Daddy had been holding him, so he was still satting pretty good.

Changed the trach, he cried, then he laughed, silly boy.  Right from one extreme to the other.  Then he fell asleep pretty quickly again.  And there was condensation INSIDE his trach balloon.  Whatever!  I've never seen that before (in all my vast experience of two and half years of trach experience with one patient).  So I pitched that trach.  It's out of here.  And today he's been doing better.  Of course, I had already put a call into pulmonology.  (I did say I try anything and everything else before changing a trach.)  By the time I heard back, he was doing a bit better, not great, but better.  They got the Trach Ninja involved (she wasn't actually in today, but they got a hold of her anyway).  She called and we went over a few things.  I now have permission to put the settings where I already have.  She's going to check on some tests from last week and call me tomorrow after she sees them.

But tonight, when he was desatting again and I was busy, I called into Andrew and Michael to turn him up another liter.  I couldn't remember exactly where he was, but they reported a good wave pattern and sats in the high 80's.  Quickest fix for that is to turn him up.  When I went to check on where he was, they had turned him up to three.  Yeah, up to three liters.  And funny, this mama seems to be processing her own oxygen a bit better, too.