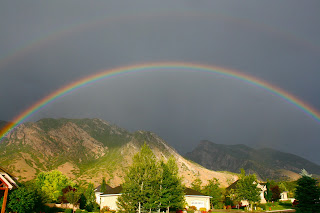 We're in the middle of a monsoon-type weather pattern (or at least Utah's version of the monsoon).  That means we have the chance for some pretty intense thunderstorms each afternoon or evening.  It's kind of hit or miss, but we watch things pretty closely.  The only piece of equipment that doesn't have a battery back-up, is Aaron's oxygen.  So we have extra tanks on hand.  I've been making sure that the emergency tank by his bed is all ready to go quickly if we need it.  But along with the rain, we can get some beautiful rainbows.  I love it when they shine against the mountains.  This picture was taken from our front porch on Sunday evening.  If you look closely, there's another rainbow above the bright one.  Double rainbow, double blessing.

Aaron's lip continues to improve.  The swelling is still going down and the bruises are turning that lovely shade of yellow-green which means that they're healing. 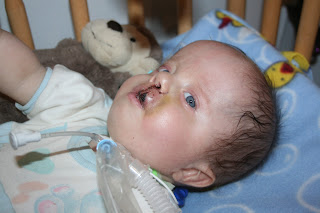 Out of all of Aaron's procedures, the one I was least concerned about was his circumcision.  Even less than his ear tubes and his ABR.  There were no risks with the ABR, but I was worried about the results.  And if his tubes had come out and needed to be replaced, there was no guarantee that it wouldn't happen again.  And of course the lip repair and the bronchoscopy were at the top of my concerns.

But what took us to the Emergency Department today?  The circumcision, of course.  Saturday night he had some bleeding at the site.  There was a bit more than I expected, but it also stopped.  Then Sunday evening, a little more.  This morning, his nurse came to get me about 5:50 because there was a lot more blood.  So I called urology and they wanted to see him.  I can tell it wasn't an emergency, or I've gotten a lot slower.  I pulled out about 7:05 for the hospital.

It looks like he popped one or two of his stitches and he was really hurting.  So they put two more stitches in, he was much more comfortable, and we were home by late morning.  It was actually nice to go up, get taken care of, and come home in just a few hours.  We haven't done that much.

The other day we got a nice surprise in the mail.  Another dad of a special needs child sent us a note and an enclosure.  I was so touched by his gesture.  We have never met him and probably never will.  Truly an example of Christ-like love.
Posted by CompatibleWithJoy at 7:20 PM