Joy Cometh in the Morning

He was back to 105+ in his fevers.  Saturday he'd been at 106.1.  We've been piggybacking Tylenol and Motrin and using ice packs.  He was moved over to the ICU vent, not just the ICU version of our vent.

In our church, the young men assist in the Priesthood and last night, Michael was being ordained a Priest so I went home for a few hours.  He wasn't great when I left, but he was stable.

Not so much when I got back.  Like, they were listing out our available options and there weren't a ton. The doc added Ativan and Clonidine to help him relax. They were talking about sedation and paralytics to allow his body to completely rest, central lines to administer meds, nitric oxide to help open the lungs, possibly proning him (putting him on his stomach) to try to recruit whatever lung tissues might be closed off. "Very tenuous" was used over and over. He was on the hospital vent at 100%, satting about 70% with dips, breathing too fast, heart rate too fast, fever (don't remember how high) and asleep and not really rousing. Like I said, it was bad.

They had stopped his feedings, essentially skipping one, and were considering putting him back on them. I asked to hold off. He's still pretty hefty. Missing those calories isn't going to hurt and he always needs more support when digesting. They were totally on board with that. We decided the order of treatment was proning, then nitric, and then the paralytics/sedation.

The nurse got really aggressive with the cooling blanket and ice packs (although we'd been using them already), and the fever started to come down. With that, everything else started improving as well. I read him some get well cards from his Sunday School class and he was interested. He batted a little at his toys. His sats improved, and when he went back to sleep, we were able to wean O2 to 80% with sats back in the 80's. 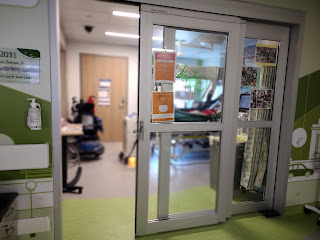 I woke up and they have him at 45%!!! He's still on a TON of support and no feeds, but there's improvement, significant improvement. Frankly, I'm sitting here crying with relief.

I know he's going to need more support through the day. His fever will probably reappear, although hopefully not nearly as high. I'm hoping, praying, and crossing my fingers that the improvement we're seeing is because his IV antibiotics are kicking in and working.

We're still not completely sure of what he's got, but it's looking like tracheitis with MRSA and stenotrophomonas (big nasty bug to go with the nasty long name) growing, and the IV vancomycin should cover it.

On a side note (mostly because this is also where I detail his medical journey and need it for my own information), we've discovered a femoral fistula. (Try saying that ten times fast.) Essentially, back in 2017 when he had a heart cath there was a hole made between his femoral artery and vein. At some point, when he's been well for quite a while, they'll go in and close that off. Its presence makes his heart work harder as the blood mixes between the two, but it's been there for over four years now and there ain't no way anyone wants to even consider surgery until he's in optimal health.

I have no idea how long we'll be here. Yesterday I had the chance to take the sacrament and then the Elders gave him a priesthood blessing. It was beautiful, and I have a hard time remembering what was said. He was blessed with strength, and his family too, and that his body would be strong. But I also got the impression at that time that this was going to be rough and long, and frankly, hard. I pray that he will kick this to the curb, and I think he will.

When he started to get bad on Saturday we asked for prayers and they came pouring in, from family, our neighborhood, and across the world. We have felt those prayers, and they are literally life-sustaining, not just for him but for the rest of us too.

Thanking God today for the love of family, the loyalty of friends
and the kindness of strangers.
~Robert Brault
Posted by CompatibleWithJoy at 11:01 AM