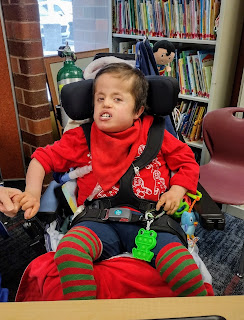 Last week was the wax museum at school.  For the third year in a row, Aaron has chosen to represent a strong female character.  I'm kinda proud, and kinda hoping it's because of the strong women in his life.  I keep trying to live up to what he needs.

Now, every child at his school is severely handicapped.  It's the prime requirement for enrollment there.  Federal law requires a child be educated in the least restrictive environment (LRE) possible, and this is pretty much as restricted as possible without being confined to home/hospital education.  In short, none of these kids are at "grade level" so to speak.  (In spite of the fact that I got an invitation to test my sixth grader for the ALL program, Advanced Learning Lab, the honors program in the district.  Whatever.)

But at the same time, they are learning and being taught and challenged.  So Aaron was asked to write 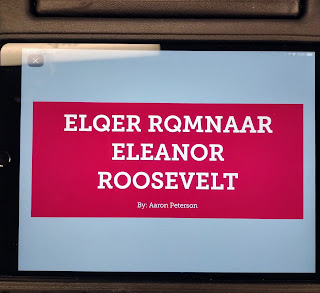 "Eleanor Roosevelt" on his computer for the report.  Here's what he did!  I couldn't believe it.  My severely handicapped child, the one that would only progress to a six to nine month level, if that, identified the first two letters in Eleanor and the first letter of Roosevelt.  It's kinda on par with a kindergarten or maybe first grade level.  A little beyond the average six to nine month old.
Now for the second part.  He IS in sixth grade.  And sixth graders are notorious for not always wanting to work.  On Wednesday they were trying to get him to finish up his report.  He didn't have enough information.
"Do you want to put this in?"
"No."
"Do you want to look at this?"
"No."
"Do you want to try this?"
"No."
"Are you going to say no to everything today?"
"Yes."
Oh, boy...  There's obviously more going on in that brain than people give him credit for.  I've always said one of the things that makes Aaron a little easier to parent than my typical kids is that he always does his work.  I may have to rethink that one...
Anyway, in other news, Aaron has now had both Covid shots, for which I am incredibly grateful!  I was a little concerned with possible side effects from the second so we scheduled it for a Friday afternoon so I could watch him over the weekend.  He was a bit more tired and needed a tiny bit more support than usual, but overall, if I hadn't been looking for something, I'm not sure I would have even noticed.
This weekend he does seem to be starting to fight something.  He's needing quite a bit more support, although still within what we can provide at home.  He's more tired, a bit more junky, and his temp is a bit higher although not technically a fever.  (100.4 is the fever threshold.)  We're having a talk right now about how good he's been all semester, but just because it's coming to an end doesn't mean he has to take a "vacation" trip up north.  We'll have to watch and see, but I'm hopeful that we'll weather this at home.  Still soooooo grateful that we have the new trachs and they're helping him breathe so much better.
Be a student of life and a lifelong student.
~Terri Guillemets
Posted by CompatibleWithJoy at 10:01 AM