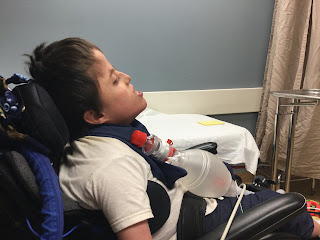 We’re here, we’re back, whatever...
At least he waited until my classes were done.  I had this fear of trying to work full-time and do my schoolwork while also commuting to and from the hospital.

Instead, I finished finals last week, got one week off, and here we are.  Of course it’s rhino.  Which is better than heart issues.  That was my other guess.  This one has been a bit stranger.  He hasn’t had the “junk” running from his nose or being pulled from his lungs.  But then I was also sick last week and didn’t start wearing my mask as soon as I should have.  I’m pretty sure I gave it to him.

Sunday was a little rough, more oxygen, more albuterol (All-better-all) and kinda tired.  I think we bagged him once or twice.  It was enough that I was on alert, especially since I’d been sick, but that’s about it.  Monday he went to school, but didn’t make it all the way through. I picked him up towards the end of the day and brought him home.  More albuterol, more bagging.

I had hoped to get through my shift Tuesday night and then bring him up to the hospital, but that’s not how it worked.  As Tuesday moved on, he was being bagged more than he was on the vent.  Albuterol went from every three to four hours to every one to two.  And it got to the point where we were activly bagging fairly regularly to keep his oxygen in the 80’s.  For frame of reference, we all sit in the mid to high 90’s.  If a typical person drops below 90, medical personnel intevene and usually hospitalize for observation and tests.  But Aaron’s heart is bad enough now that we cannot keep him up there and we tollerate (don’t like but deal with) saturations down to 80 on a regular basis.  And on Tuesday, that wasn’t happening. 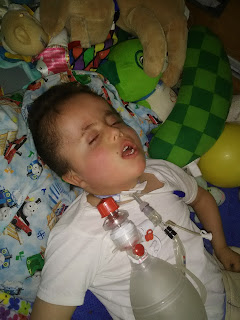 Usually when Aaron is put on a “bag” we need to give him a few breaths to bring him back to where he belongs but once there, the flow of 100% oxygen through the bag is enough to keep him in a good spot.  We don’t usually have to force the breaths in to keep his lungs open.  On Tuesday, we were having to do this.  I kept remembering December of 2018 when I almost pushed things too far.  That was the time we made it to Primary’s in 30 min from Alpine in rush hour.  It usually takes almost an hour with no traffic.  (It’s amazing what lights and sirens can do to speed a trip.)  We bagged him on 20L of oxygen the whole way and barely maintained 65% oxygen saturations.  I just couldn’t do that again.

So I gave up. (After putting together finals care packages and dinners for the family, ‘cause you know, that’s how special needs families roll.  We still “schedule” our emergencies.)  I knew by Monday that we’d end up here, I was just wasn’t sure when.

I figured that it was either rhino (or something similar) or his heart.  And frankly, I wanted rhino.  It’s a virus, it’s nasty, it really can work him over.  But if we can support and maintain, he’ll get past it.  There’s not much more we can do for the heart.

And it’s rhino.  His old buddy.  The one I’d really like to kick to the curb.  Like, can’t we play with a giraffe or an elephant instead?

This time though, it’s not like it was that awful December, or even worse, last September when he was so, so, SOOOOO sick.  That was the first time in a long time when I wondered if we were facing the end.  I tried to figure out if we could possibly get him home before he went Home.

This time is different, in a good way.  The ER was hopping when we got here, and seeing as everyone knows I’m not afraid to call for help when needed, and can do most things on my own, we were pretty much left by ourselves during that time.  He stayed on the bag and hung out watching cartoons, aside from x-rays (which looked pretty typical for him) and labs (dang rhino).  When they brought him to the PICU, they put him on the ICU version of our vent at 100% oxygen, but turned him down over the course of an hour to pretty close to his normal.  And that’s where he’s been.  We’ve upped his breathing treatments and support from a respiratory standpoint.  They did stop his feedings for a while and just ran IV fluids to make sure he was good that way.

Yesterday afternoon he started running a fever.  It got as high as 103 before the Tyelnol started working but has been gone since midnight.  They pulled a bunch of other labs: blood cultures, urinalysis, and trach brush to make sure we weren’t missing a bacterial infection, but so far nothing is showing up.  I kinda think the fever will be back today although hopefully not as high.  But overall, this kid is looking good.  I think the plan today will be to jump to his regular vent and see if he can maintain there.  If everything goes well, we might even be able to break out tomorrow!!  We’ve NEVER gotten out of here that fast with rhino.

Anyway, fingers crossed that he keeps moving in the right direction.  I’ve kinda gotten used to my 20 foot commute rather than an hour each way.

Experience is a patient teacher,
always willing to repeat the lesson for slow learners.
~Robert Brault

Posted by CompatibleWithJoy at 10:19 AM