Another First and a Challenging Time, Part 2 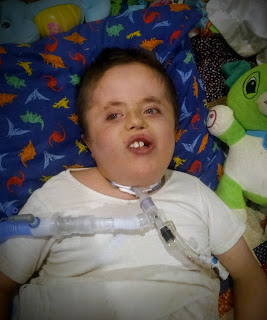 We almost didn't make it to the Primary Program on Sunday.  Saturday evening was a bit of a mess for Aaron, and frankly, I ended up shooting in the dark trying to pull him out of it.  Fortunately, it hit the mark (somehow).

Saturday day was pretty darn good.  He watched football with his brothers and supervised me in the kitchen.  But that evening, he started to struggle.

And by "struggle" I mean, he didn't have any desire to keep his oxygen sats above 80.  In fact, mid-70s were where he wanted to hang out.  Um, no bueno.

We tried everything.  I bagged him, and unless we were actively bagging, he was down in the low 80's.  Normally, once we get him up, we can leave him on the bag (oxygen flows at 100% through that) and he does fine.  Not this time.  So we bagged in some albuterol, using the bag to force it into his lungs.

I should say, we had already given albuterol a few times, twice during the BYU game (apparently he couldn't handle the excitement of them trouncing their opponent.  Maybe we should have watched Utah instead).

We changed his vent to secondary settings (more support).

I put him on the big tank for a while.

We changed the trach.

Bagged him some more.

Vented his belly (which did help a tiny bit).

Finally, I gave him a "stress dose" of lasix.  I simply couldn't think of anything else.  His lungs sounded good.  He was laughing at me, for Pete's sake!

And we finally gained some ground.

He made it through the night and was doing better by the morning, so he got to go to church.

But today, well, just as church started yesterday, I started wiping his nose. And we're now on "snot patrol."

The fun goes on.


"Life gets more interesting as it goes on. It becomes fuller because there is perspective there."
Ann Dowd

Posted by CompatibleWithJoy at 6:41 PM