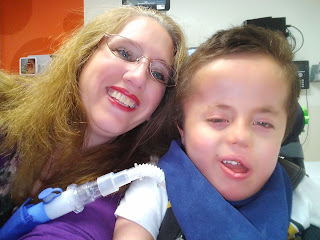 A week ago Aaron went into the hospital for a lung CT scan.  Prior to his pneumonia in December, he was often off the vent up to eight or nine hours a day.

I was hoping that with the new trach, all our problems would be solved.  (See how I work?  New equipment fixes everything, right?)

It DID fix a lot of issues, but not that one.  Some days we could do an hour or two, most days we had to throw in the towel after ten minutes.

Is it disease progression?  (Somehow that seems to be a common phrase.)  Or something else.

Well boys and girls, it might be disease progression but there's definitely something rotten playing into it as well.  Something sticky and nasty and gross, and it's stuck in his lungs.

Junk.  Mucus.  Snot.  Whatever.  And there's a decent chance it's been there since his pneumonia.  And not only is it blocking up individual alveoli, it's also blocking off sections of his lungs, trapping air, which means no gas exchange.  No oxygen in, no CO2 out.  Yuck.

So how to get it out?  Well, that's the rough part.  We've increased his vest treatments to three times a day and also added in something called hypertonic saline.

Yeah, breathing in salty humidified air that is twice as salty as the ocean.  Doesn't that sound fun?

Um, not really.  And he doesn't like it either.  So three times a day (his nurses do one of them for me) he gets to do this.  He hates it.  I hate it.  He's fine with the vest and the albuterol pre-treatment.  But then the saline starts.  And within seconds, he starts coughing and gagging and retching.  We vent his tummy and he throws up whatever fluids and acids are in there (we do the treatment as long after a feeding as we can).  And we suction and suction and suction as he brings up the garbage that's been hanging out inside of him.

But here's the thing.  He does it!  And he doesn't fight it.  He doesn't like it, but he doesn't disconnect, doesn't pull away.  He takes it.  We started this a week ago yesterday.  For the first several days, three times a day, he'd cry when I started the saline, but not before and not after.  Even though he knows it follows on the heels of the albuterol, he laughs and plays through it.  (And yes, he knows it's coming.)  The last few days, he's grimaced, but not cried through the treatments.  And as soon as the saline is done, he's back to being happy.  I mean, As. Soon. As. It's. Done.

How many of us can do that?  How many of us whine and gripe and complain about things we know will happen, have to happen, and then continue the grouse-fest once it's done?

And we're seeing results as well.  We do pull a LOT of garbage out of his lungs each time.  It takes about ten minutes or so to nebulize and we're suctioning pretty much all the time, giving breaks so he can catch his breath.  For the first several days, I didn't see any difference, except in the volume of secretions.  But the last two or three days, we're seeing lower oxygen needs, less sleeping, more vocalizations.  It is working. 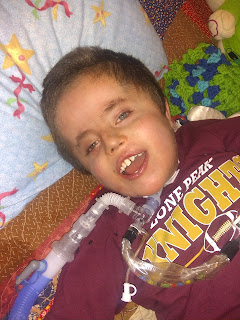 We get to continue this until at least the end of August when we see pulmonology again.  It's still not fun.  But we're both settling in, him probably better than me.

In other news, we did his ear CT scan at the same time, but that looked good.  He also had his yearly scoliosis screening this week at Shriners.  The good news there is he's stable.  There's an error margin of about 4% and last year he measured at 44% and this year at 42%.  Now, you don't get to go backwards, but at least it isn't worse, which is amazing because once someone reaches at 28% curve, it's like a stack of dominos that just fall over.  So yay for a good report.

And now to see if I can match my attitude to his.


Attitude is a little thing that makes a big difference.
-Winston Churchill


Posted by CompatibleWithJoy at 9:52 AM