Stumped, and a Superfast Turn Around 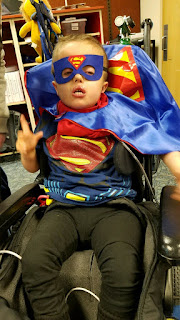 Soooo, back in September I told Aaron he had to be good for September because it just wasn’t his month, and October was kinda full, too.  Guess he took me at my word, ‘cause it’s November and he decided to take his turn.

Last Monday he came home sick from school and we got x-rays and labs, which came back mostly okay.  His ped figured it was a tracheitis, or infection in his trachea, so we started antibiotics and he stayed home a couple days.  I had to laugh at the argument I had with myself on Halloween.

Friday he was a tiny bit off, and Saturday as well, but nothing too bad.

Sunday was another story.  He was struggling from the get go.  Ten liters of oxygen, working a bit harder, breathing a little faster.  I bagged him for a few minutes before we left for church and gave albuterol hoping to pop those lungs open and give him what he needed. No go.

I ended up having to bag him off and on (mostly on) through church.  Why were we there?  Well, we were already there and had the car that everyone came in. I could handle things as well there as at home, and well, we were. 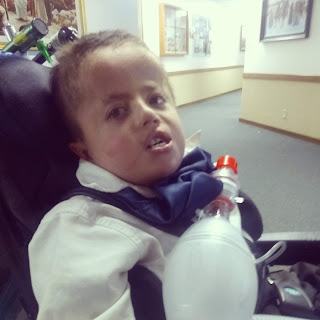 Plus, if you remember, Joseph leaves for the Missionary Training Center on Wednesday, so Sunday was our very last chance to get everyone together for a family picture.  The next opportunity will be fall of 2020.  When you’ve got a kid whose life expectancy at birth was less than two weeks, you do what you have to, and you don’t take for granted that you have two more years.  Always hoping, but not assuming, you know.

So we did the pictures, although I haven’t seen them yet, came back inside and called 911.  Yeah, no way I was going to be able to make it up here on my own.

Even in the ambulance, we struggled with his sats.  Normally if you bag Aaron, he pops up to the mid-90s really easy and just hangs out there.  But we were bagging on 10 liters and couldn’t get above 82%.  Not really what any of us liked so much. 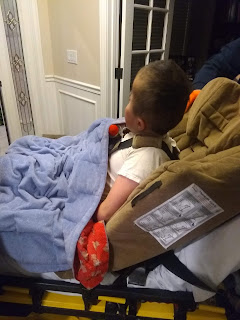 That is until about five miles out.  All of a sudden he decided that maybe this was okay.  He popped up to the mid to high 90s!  And pretty much stayed there.  Even in the Emergency Department he was looking good, like pretty close to home baseline good.  We pulled labs (again) and got x-rays (again) and nothing really stood out, except a higher CO2 (the gas you’re supposed to breathe off).

Everyone here is pretty much stumped.  Higher CO2 isn’t great, in fact, it’s not good at all, but we don’t know why it happened.  However, it’s back down again this morning.  We have no answers at all, just a few vague suspicions. 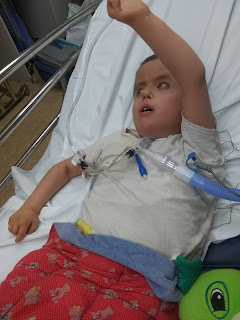 But given that everything is looking good, the hope (plan) is to start up his feedings again and as long as those don’t go sideways, we’ll come home tonight.  So all in all, about 24 hours.  Not too bad, especially considering yesterday.  But I wish we had some answers...


“The important thing is not to stop questioning.” – Albert Einstein
Posted by CompatibleWithJoy at 11:59 AM