They all agree that he's got a pneumonia, but it's starting to look more viral.  There wasn't much at all that grew out of his trach culture and his white blood count was on the high end of normal, so we've stopped the antibiotics. 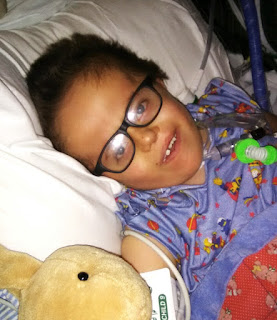 We tried to make the jump yesterday to his home vent (as opposed to the ICU vent) but that plan got derailed.  There were some challenges in getting some of his heart meds from the pharmacy, plus some nurses and RTs who didn't know him that well made everyone a little nervous about trying that.  And the all powerful question, is he really ready?

Today I pushed and we've done it.  He's back on the type we use at home, although still using a lot of oxygen.  Still, progress, right?

He's happy, he's playing, he's watching movies.  Music therapy came by yesterday and he wanted that guitar.  He was pretty sure it was supposed to stay with him. 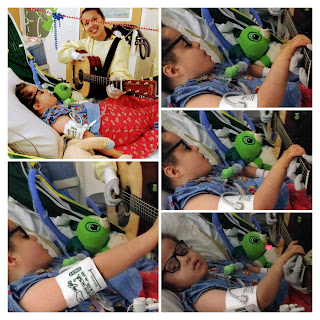 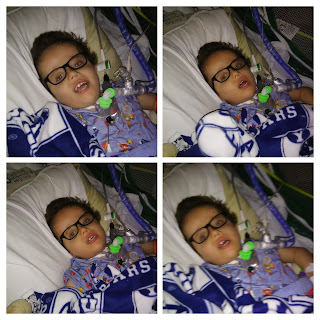 Tomorrow's the big rivalry game here in Utah, the "Holy War" between BYU and the U of U.  Yeah, our whole family bleeds BYU blue, except the U is where Aaron gets such awesome care.  Unfortunately, there's been a dearth of BYU victories since Aaron's birth, and we've been stuck up here for most of those games.  Social work to the rescue:  they found a great BYU blanket for him.  Andrew says if we're here, he has to wear blue.  Good thing he had a blue onesie on when he came up, right?

Not sure where exactly things will go from here.  He's tired, which means he uses more oxygen.  (Seriously, kiddo, you're in bed, just go to sleep!)  We just asked RT to come do his therapy and breathing treatments a little early because he's struggling to maintain on 15 liters, but we're not ready to throw in the towel yet.  Fifteen is as high as the home vent can sustain.  With the treatment, he's doing a bit better, but I doubt the floor will be happy to see us at this point.

So he's on a bubble, and we're praying that when it pops, it finds us either going upstairs, or maybe even down and out the door.  Really hoping it's not a cha-cha:  a step forward, a step back and a few to the side.