Life has been busy, good, but busy.

Yesterday marked seven years since Aaron came home from the NICU.  Seven years.  Had I been able to look forward to today, I don't think I would have believed it.  But I remember how overwhelmingly grateful I was that he was able to come home, that we could bring him here, love him, make memories, feel his sweet spirit.

He had his "all you can eat" appointment the day after his birthday.  Overall, the doctors are pleased with what is happening.  We discussed some different strategies regarding his asthma, maybe using an antibiotic that has an anti-inflammatory component instead of a steroid the next time he has a flare-up in conjunction with a cold.

They've discontinued his acid reflux med.  That one has me a bit concerned, but only a little bit.  The thought is that since he's doing so much better on his blended diet, and he's bigger, maybe he won't need it.  The med does a great job at reducing stomach acid, but not just in the stomach.  It reduces the acidity of the whole body, including the lungs.  Oh, yeah, those lungs.  One of his two biggest challenges (the other being his heart).  And a more acidic environment helps to deter those nasty bugs that love to live, grow and thrive, and make him sick.

This weekend should really show us if it will work.  We cut his dose in half for two weeks and then stopped it on Wednesday.  It usually takes three to four days after stopping for symptoms to really rev up.  So far, so good.  I'm not seeing anything different.  So yea for better lung health, and yea for one less medication!!

He has his cancer screenings, which came back completely negative.  We expected that, but still, when the radiologist came in to do a few of the pictures himself after seeing the initial ones, I was nervous.  Aaron thought the slimey stuff was ticklish, and really wanted to help.

Aaron is going to summer school twice a week.  For those who think that cuts to services really don't matter, can I just say, they do!  Two years ago, in preschool, he got a six-week extended school year, three times a week.  Last year it was twice a week for five weeks.  This year it is only twice a week for four weeks.  Eight days of summer school.  ALL of Aaron's therapies, you know, the ones that strengthen his body, teach him how to sit up, roll over, etc, are provided through the school.  So from the end of May until almost September, he'll get a grand total of SIX hours of ONE therapy (45 minute session, once a week), instead of 45 minutes two to three times a week, plus his other ones.  We do what we can at home, but I'm kinda shooting in the dark.  I don't have the skills and knowledge that his therapists do. 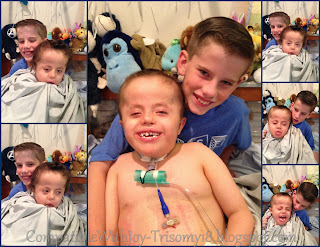 He also got a haircut.  We're working really hard on helping him hear better, which means wearing his hearing aid.  It's really cool!  But if anything, including hair, is touching it, there's feedback noise. My poor silly monkey.  He's really not too sure about those clippers.  But true to his nature, he bounces back pretty quick.  After a bath, he was "all better" and ready to play.

This next week will bring cousins, aunts and uncles, and grandmas and grandpa.  Lots of family, lots of fun.  Summer time:  easy schedules, lazy days, late nights.  Lots of memories.


Summer is like childhood.  It is full of warm memories and gone too soon.
Kellie Elimore
Posted by CompatibleWithJoy at 9:42 AM