RollerCoaster!! (And a Silly Kid) Earlier this week I ran into a friend I hadn't seen in a long time and we got to talking (go figure).  In the course of things, she asked if life just seemed "normal" to us now, or if it was still tricky and hard.  I think she's one of the first to put voice to the way things are for us.  This is just life the way we know it.

It's almost like going from single to married with kids, I guess.  You know you were busy, active, and your life was full, but you handle so much more now and often without even thinking about it.  There's the major adjustment, and then of course lots of other adjustments, but you mostly just go with it.  And that pretty much describes it.

But this week, man, the highs and lows were so quick it could give you whiplash. 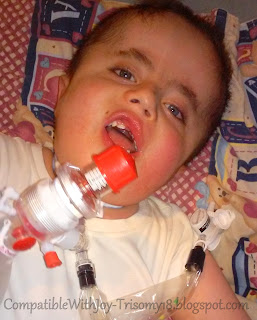 The steroids he was on really did their job.  They reduced the inflammation in his lungs and he was breathing better than he has in longer than I can remember.  He's even used his "speaking valve" for hours, often up to 12, a day.

But then yesterday was a struggle, a really big one.  We went to a funeral for a tiny baby and while there, his oxygen needs went up.  And up.  And up some more.  We actually had to leave early and head for home because even with the extra tank in the car I wasn't going to have enough.  He ran on eight liters all the way home, up from the two he needed when we left the house. 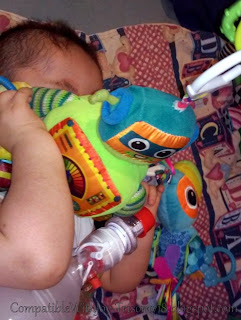 At home he continued to climb.  We started using Albuterol every two hours.  We bagged him.  We suctioned and got nothing.  We changed out his trach.  He finally maintained, but barely, on ten liters.  Yeah, TEN, the limit of what we can do at home.  And I couldn't figure out what was going on.

I mean, he certainly didn't act sick.  Besides his oxygen needs, he looked great.  In fact, he felt like being bagged was an imposition because he couldn't play as hard.  The bag kept getting in his way.

I couldn't understand what I was missing.  I was on the verge of calling 911 multiple times, I was antsy, anxious.  But his demeanor was so great, and there was literally NOTHING else out of the ordinary.  So we waited.  And I worried. 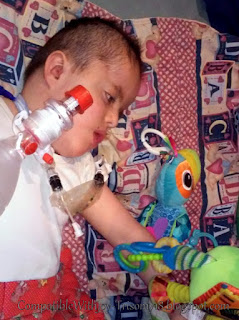 And then it happened.  Just before his nurse got here.  A huge "code brown."  Nasty, gross, and large.  (TMI?  Sorry.)   And all of a sudden, he started doing better.  Ten minutes later we were on eight liters, after 15 minutes, it was six and I went to bed.  Now he's playing happily on four.

Thank goodness for easy fixes (even if they're smelly).  We get to spend Mother's Day as a family and we'll all be here for Jonathan's call from Argentina this evening.  And it's my last one!  He's home in three and a half weeks!!  (But who's counting, right?)


Giving up is conceding that things will never get better, and that is just not true. Ups and downs are a constant in life,
and I've been belted into that roller coaster a thousand times.
Aimee Mullins

Posted by CompatibleWithJoy at 9:06 AM