Highs and Lows, or Lows and Highs 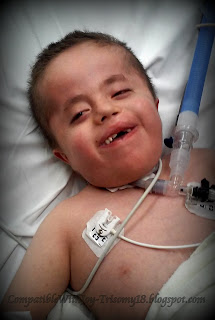 Last night was a rough night (lows) but this afternoon has been really good (highs).

We settled in last night, but I woke to several alarms about 2:00.  He was struggling again, and once again, we had decreased lung sounds.  He was collapsing, again.  That put the kibash on going home today.  X-ray was called and there was definite haziness in his left lung.  He was also a lot higher on his oxygen.

Today we discussed using the speaking valve for up to six hours and getting a blood gas (pH and carbon dioxide levels) afterwards to make sure that his use of that hadn't contributed.  So we tried this morning, and gave up quickly.  He was just working really hard and breathing fast.  A little later, he was making his snoring type noises, and still working pretty hard.  So in spite of the fact that we had just changed his trach 24 hours earlier, I decided it was time to do it again.

Good call.  That thing was awful!  I don't know how it became so occluded after such a short time.  For reference, we usually change it every 2-3 weeks, and there's rarely anything in it.

After the change, we tried the speaking valve again, and once we suctioned out his upper airway, he did amazing!  In fact, he did the whole six hours, and then gave us a perfect blood gas.  So he's cleared to keep using it, yea!!

He also treated the unit to a concert.  It was loud enough that some of the nurses were concerned that he was upset.  Nope, just playing with his voice.  Of course, as soon as I got the camera out, he toned things down.  But here's a sample of what he was doing. 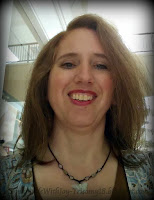 So IF he can do well tonight, and IF he can maintain on lower oxygen limits, we MIGHT go home tomorrow.  If not then, I'm almost certain by Tuesday.  There is always the chance that something is just starting to brew, in which case, all bets are off.  But for now, it looks hopeful.  And as long as he's good by Wednesday, surgery can still take place in July.  Wednesday starts our golden six-week bubble.

Oh, and look what a friend did for me.  She treated me to a new "do."  It's been years since I've had a cut and color by someone else.  I feel like a new woman.


“I hate to complain...
No one is without difficulties, whether in high or low life,
and every person knows best where their own shoe pinches.”
― Abigail Adams
Posted by CompatibleWithJoy at 7:25 PM