Random (Grumpy) Thoughts and Some "Work"

Okay, so I almost always find time to write on Sunday.  Not this last one.  I was grumpy, cranky.  I mentioned to a couple of different (pretty close) friends that I just couldn't write that way.  They both told me that was a great time to write.  That no one believes I ever get grumpy.

Um, I think I can hear a couple of my kids laughing about that one from several hundred miles away.  Not to mention my siblings and my parents.  I haven't even mentioned those conversations to the ones that live in this house.  Not quite ready for the chortles and falling down in disbelief.  Yep, I can do grumpy really well.

See, I'm not real fond of winter.  Not thrilled with snow.  Downright dislike the cold.  Yeah, I know I split my high school years between Alaska and New Jersey.  Neither of those places is known for balmy winters.  But this is the time of year I have to keep reminding myself that I willingly left California because we were just too cramped there.  This is when I have to remember that all of us squished into a home smaller than my basement would be a bit tight.  And winter, while a bit later in coming, has shown up with a vengeance.

See, I actually am okay with snow, if I can sit inside watching it, while reading a novel and drinking hot chocolate.  But that's not in the cards for this girl's life.  We have a big driveway, five (as of today, four, one broke) snow shovels, and a child that needs to have safe passage in a wheelchair.  So guess what I found myself doing Sunday morning.  And to top it off, it had been COLD!  Like, the kids will count down the temperature on the car as it goes from the garage (23 degrees) to the school (4 for the early morning high school run, only 2 by the time the junior high kids went).  And it's stayed cold, All. Week. Looooooong.

Add to that, I had to drop out of our Christmas choir.  See, they ask that you don't miss more than two 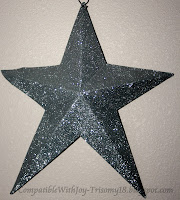 rehearsals, three is the very outside.  I missed my first when I went to help my mother-in-law following her surgery.  No biggie.  I wouldn't be missing any others.  Then I got sick, over a Sunday of course.  Then Aaron spent two more up at the hospital.  I probably could have pushed it, and they would have let me in.  But I didn't feel comfortable missing so much rehearsal and being confident in my parts. So yeah, grumpiness abounded.

But a friend has inspired me to do some "work" in my own head, to look inside, to find the joy in the moment. To see that all things work for our good.  And it has been work.  I've had to look hard and actually physically do things to help me get out of my slump.  Sometimes things I had no desire to do, in the beginning at least. 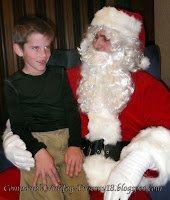 The kids saw Santa at the church Christmas party on Saturday.  It was nice, but I wasn't thinking too much about it.  Michael tried to ask Santa for an iPod.  Yeah, like that's going to happen.  Bless him, Santa told him he'd have to have a talk with Mom and Dad before he could promise that one. 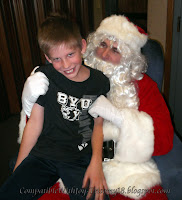 Not sure what Andrew asked for, but Santa had fun tickling him. 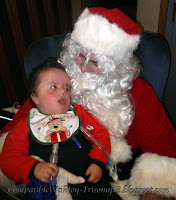 But when I handed Aaron over, Santa was very still.  He looked at me with the warmest smile, and then at Aaron.  And said, "Aaron, it is such a privilege to hold you."  And he even made a point to tell me later how grateful he was that I had let him do this.  Wow, really touched me. 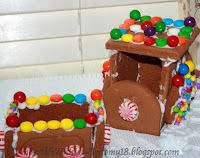 We put up the Christmas decorations (late, I'm sure that helped play into my nasty mood).  The stockings are hung, and two aren't up.  That tugged at my heartstrings a little bit.

But all the bears are out, every one accounted for.  And yeah, they're kinda jumbled up, with the Nativity scene having been played with.  But that's pretty much par for our lives, so that's okay. 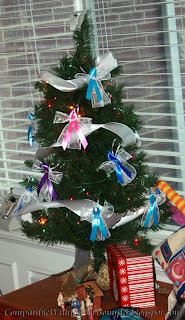 The poinsettias aren't quite as nice as when Mary and Jonathan have done them in the past, but they still look pretty good.  And Aaron's angel tree is decorated, with a butterfly on top for his angel friends. 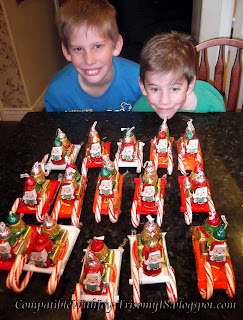 Tonight, Andrew and Michael and I made candy sleds for a "store" project that the 5th grade does.  I'm afraid I haven't been a very good mom about this in the past.  Andrew's the 5th child we've had do this.  I think the other kids were pretty much on their own.  One of them sold "desk clean-out services."  Yeah, I guess the 5th graders had similar feelings about their desks that my kids do about their rooms.  It didn't sell so well. 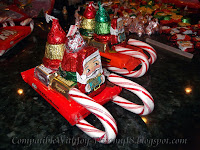 And I didn't much feel like doing the project tonight.  But it was important to Andrew, and once I got into it, it was actually a lot of fun!  And they even turned out really cute!  The "work" is working. 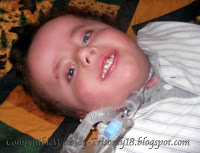 Then I went to do Aaron's cares.  I have no idea what was so funny, but this kid was busting up.  And any doctor out there who thinks these kids are vegetables?  Well, let me just invite you over to help with those cares!  If he's a vegetable, it's some kind of crazy Mexican jumping bean!! 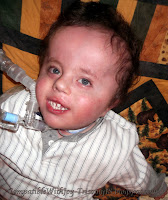 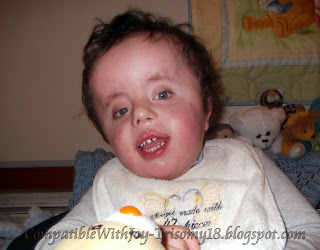 And I'm starting to find it again, the peace and comfort I know is there. It's not all rosy.  There are still going to be issues, challenges.  And I'm going to have to work on that, hard, probably every single day.

Like I said, I don't do winter well.  The dark and cold have a way of making me feel dark and cold.  But spring will come.  And in the meantime, I have a warm home, a wonderful family, and even cars that warm up (eventually).  And I'm not the only one out there wielding the snow shovel.  So we'll make it work.  After all, isn't that what life is about?


I may not be there yet, but I'm closer than I was yesterday.
~Author Unknown
Posted by CompatibleWithJoy at 10:17 PM