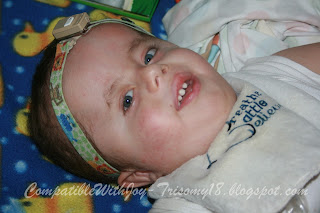 Today is Aaron's 3rd Birthday.  That's right, 1093 days on this earth, with our family, blessing us with his spirit.  And how's it going?  How's he doing?  Well, he's fitting right in.  This year, he joins the rest of us in celebrating his birthday on a day that's more convenient that the actual day of his birth.  We'll be having his party on Saturday at our home from 6-8 p.m.

But today, he's just hanging out with Mom and Michael and playing.  Michael spent time in his bed with him this morning, hanging out, reading books and just playing.  He's setting off a ton of alarms, but that's because he's so wiggly and playful.  Just, "hey, I'm right here, being cute, don't forget" alarms. 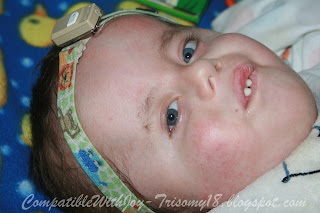 He had been increasingly unstable starting around the weekend.  Using more oxygen, desatting more, any of this sound familiar?  By Tuesday, I could really tell my stress level was up, quite up.  But I just couldn't figure things out.  Then Tuesday night, when I went in to give the nurse report, I noticed a large chunk of wax on his right outer ear, followed by a bunch of yellow pus (too much info?).  Yep, we've got ourselves an ear infection.  I felt like celebrating!  Yeah, I know, not usually a cause for celebration.  Usually a cause for tears on both mama and baby's part.  But not for us, not for him.  Now I have an explanation for what has been going on.  And it's a simple explanation, a fixable one.  And even better, we started fixing it right that minute.  We have standing orders for ear drops and keep them on hand.  So we got going!

And he's done much better, much, much better.  I've spent the last week gathering and making things for him to replace what we're having to give back to his early intervention team.  With his third birthday, he ages out of their system and into the public school system.  So the leg braces and yoga ball and long sitter and table (and maybe a few more things?) have to go back.  Last week I made him leg braces and a weighted blanket.  I've got the materials for his long sitter, I just have to find time to create it.  The table?  Well, that's in the brain, but I haven't even managed to get the wood for it.  It's a totally simple thing, but it just hasn't happened yet.  And the yoga ball, well, that one I'll just have to buy.  But at least it's not labeled as medical equipment, so it's reasonable. 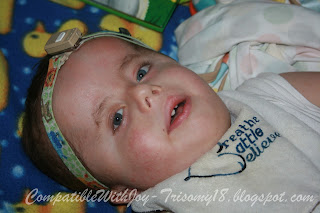 Anyway, he's napping now, resting up for his party.  We're grateful to be celebrating another one with him here.  And we're so very grateful for all the support from his medical teams and all the prayers that are offered in his behalf.  One man at church told me last week that their little daughter makes sure he is remembered in every single one of their prayers, and if they do somehow forget, she always reminds them.  I asked him to tell her thank you from us.  I'm sure those prayers play a large part in giving him strength.


You can hope for a miracle in your life,
or you can realize that your life is the miracle.
~Robert Brault


Posted by CompatibleWithJoy at 2:13 PM