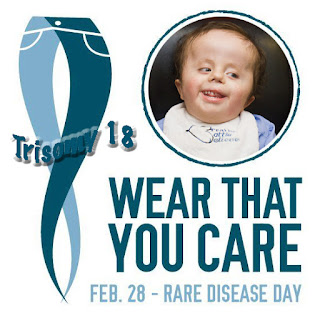 Today is Rare Disease Day.  So many of us go through life not knowing how "un-rare" this is.  (Okay, that's not really a word, but you know what I mean.)

According to the Global Genes Project, 80% of rare diseases are caused by variations in genes.  Here are some interesting statistics:

Some of ones that reach out and grab me are:
30% of children with rare diseases will not live to see their 5th birthday.
and Approximateely 50% of rare diseases do not have a disease specific foundation supporting or researching their rare disease.

Now, I'm not trying to take away from all the wonderful kids cancer and diabetes groups.  They're awesome!  They really are.  And thanks to a former presidential candidate, Trisomy 18 is certainly better known than many.  But the fact still remains that there are a LOT of kids and families out there that need support, more support than they're getting.

So, just for today, think about those who don't have a great support system, the kids and their siblings that don't have lots of money being donated for research and camps and conferences.  And if you've got a couple more minutes, look into some of them and educate yourself.  Three years ago, I had only heard of Trisomy 13 in passing and Trisomy 18 not at all.  It's a completely different world, a wonderful world, but also a scary one.

Chances are really good that you know people (yeah, more than one person) who are affected this way.  Reach out and put your arm around them.  Let you know you care.  Let them feel your love.

“Alone we are rare … together we are strong”

Posted by CompatibleWithJoy at 7:16 AM