Back to School and a SOFT Picnic! 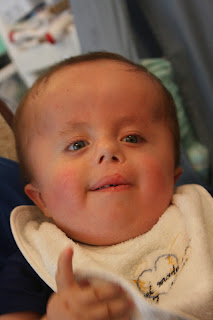 This past week was Back to School in a big way around here.  Everyone except my bookends (Deborah & Aaron) are in school full time as of this next Monday morning.  Deborah's working full-time graveyard shifts as a CNA and Aaron, well, he just keeps on with his own things.   He's doing sprints off the ventilator twice a day now, for 15 minutes at a time.  I try to space them out by about 12 hours, but the second one is always a little harder than the first.  He breathes a little faster and needs a little more oxygen to maintain himself.  But he keeps on smiling and is a champ about the whole thing.  He's definitely my little champion. 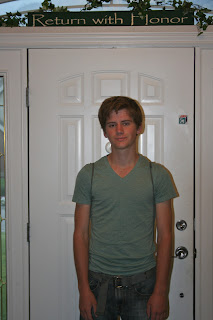 Last Tuesday was the first day of school for the five in public school. 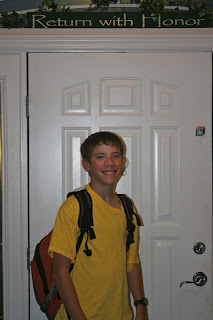 Matthew was the first to leave for 9th grade, followed by Jonathan in 11th grade. 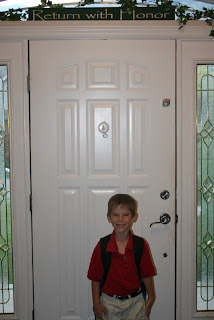 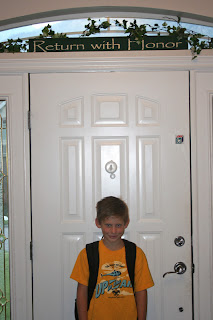 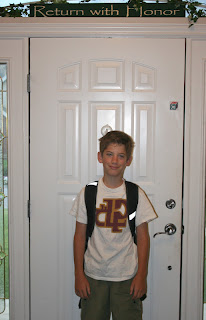 Michael (1st) and Andrew (4th) tore out of here for the bus as soon as I said they could go.  It was a full 20 minutes before the bus was supposed to show up and it's about a three minute walk (run?) to the bus stop.

Joseph was the last to leave for 7th grade. 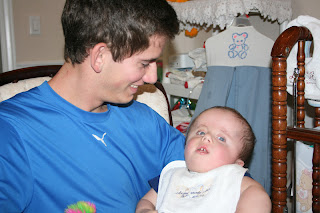 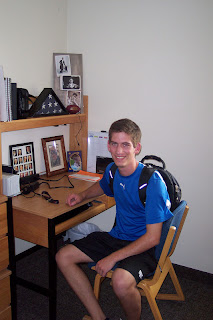 Wednesday found us moving David into his apartment down at BYU so he could be there for freshman orientation.  Our third to experience this, he had SOOO much less than either of his sisters.  Our first time, we took out the back two benches in our extended van and it was PACKED.  When the second one took off, it was just the back bench pulled out and was nicely full.  David?  No benches out, and it didn't even reach the seat backs.   My girls tell me that's the difference between boys and girls.  Oh, well, love them all.  Anyway, Mary came along to help move him in, which was great because he's on the third floor.  And no, there is no elevator.

Thursday was a day off, at least from moving.  It was also the day that all four of our soccer teams were practicing.  A little crazy to have them all the same night, because they're NOT at the same location, or the same time.  But also nice to only remember one night of practice, at least last week.  Everyone knew they were on Thursday, so when one started getting ready, the other's were reminded, too.  (And so was Mom, for that matter.) 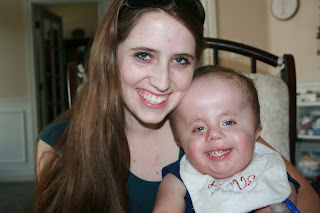 Friday, Mary and I headed down to BYU.  THAT was crazy.  She's in a great apartment complex with what looks like some really fun roommates. 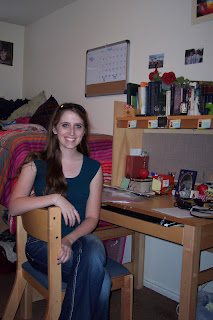 But parking?  Not so much.  EVERYONE was trying to move in.  TONS of monster vehicles like my beast, Suburbans and so on.  And almost no parking.  We were lucky to find a spot about half a block away from her apartment.  But she's on the ground floor (above underground parking that was closed at the time, so 8 steps up) so it wasn't quite as hard as it could have been.  Got her moved in and settled, and headed back home.


Saturday, William had an all-day meeting, so Aaron & I took the kids to their soccer games.  He made it to all three of the games that day.  (Joseph's 1st game is next week.) Then last night was a highlight of our year.  We were able to go to the annual local SOFT picnic.  It's a fun gathering for families who have been touched by Trisomy 18, 13 and other related disorders.  Aaron was one of three miracles there.  Last year, I didn't get my camera out.  This year, I almost forgot again.  But I did remember towards the end and we got some shots of Ashton (T18, 13 years), Arianna (T13, 6 years) and Aaron, along with Dr. Carey.  LOVED being able to spend time with other families who are or have walked this path.  So many angels gone on before, gone but definitely not forgotten.


Every single thing changes and is changing always in this world.  Yet with the same light the moon goes on shining.
~Saigyo
Posted by CompatibleWithJoy at 9:51 AM