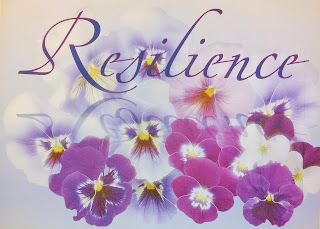 Okay, it's time for a "therapy" type post again.  You've been warned.

One of my (self-assigned) assignments for a class was to pick a word to focus on, reflect on, and use to re-center myself.  I'm supposed to use it to help frame both professional and personal regulation.  When I asked the family hive mind, the one all the kids who responded chose was "resilience".  Various others had some other ideas, but that's the one that spoke to me, perhaps because my kids, without consulting each other, said so.

So resilience it is.  And I like it.  One described it as ocean waves that keep coming in, and sometimes they send you for a tumble, but you get back up.  When I asked what resilience looked like, another said pansies (you know, the flower I associate with Aaron, the one on the blog).

But maybe it's a bit like praying for patience.  I learned LOOOONG ago to never do that.  See, God doesn't give you patience.  He gives you opportunities to practice and develop patience.

And I'm left wondering if resilience is something similar.

Can you tell I'm having a bit of a rough time?  (And I'm avoiding homework??)

So here we go, and like I said, you've been warned.

Aaron is still struggling, although he might have finally gotten rid of the ear infection that sent us to the hospital in the middle of the night in an ambulance on August 11.  But it took three different courses of oral (okay, g-tube) antibiotics and a fourth round of three antibiotic injections, each 24 hours apart.

And yesterday he decided once again that breathing was totally optional.  As in even with the bag, his nurse was struggling to get him out of the 60's.  Someone tell this kid if he's going to be a rebellious tween, he needs to pick something else?  So I raced out of a (mandatory) meeting and picked them up at school.  (It didn't help that last week as I passed the school, there was an ambulance and fire truck there with lights on and doors open.). Anyway, we got home and did a trach change that went pretty normally.  There was some "junk" in the trach, but not completely blocked.  So who knows?

And then the fun began.  Big blood clot.  I'll spare you the picture I took but about the size of two peas stuck together.  And then more bleeding, frank, fresh bleeding.  And later, another.  And another.  All told, by the time I got up this morning, he'd had about eight clots that he'd coughed up with fresh bleeding behind each one.  After the first two last night, I decided he wasn't going to school today.  The trouble with bleeding is a two-edged sword.  Suctioning, especially going just beyond the trach, can make it worse, but not suctioning can lead to clotting inside the tube, cutting off all breathing.  See the problem?

This morning when it continued, we had to head in.  So we spent the entire day in the emergency room.  They ran a ton of labs, took an x-ray, and called the ENT who brought in a fun camera to look down his trachea.  Long and short, they found lots more blood and clots, mostly up by the end of the trach tube.  The thought is that it is curving enough that it's rubbing on the front of the trachea and causing the problem.  Unfortunately, the solution is probably a longer trach, which doesn't just hang out on hospital shelves.  It's a specialty trach, and I really didn't like the other options we had there.  We did come up with a workable plan until a new one can be acquired, but then given the amount of blood (and the fact that just as they came in, he did block his trach leading to us doing an emergency change), they wanted to keep him for observation.

Nope, not happening.  I was very much against it unless there was something they could do there that we can't do at home, and there's not.  In fact, we can watch him better at home than they can there just due to staffing and protocols.  So home we came.  And here we are.  But the other part is that he's got some liver and heart labs that are wonky, more than usual.  And I don't like it.  At. All.

My friend died last night.  I don't even know how to process this.  It's been coming, but still, to have it here...  I ache for her husband and kids, and the whole neighborhood. She was, IS, an amazing person.  Like I said, I don't know how to do this.

And then there's school.  17 credits is a LOT.  And today was supposed to be spent in study, working on my papers, my mid-term, my term paper, and the group classes I really need to get teaching.  Um, nope.  Didn't happen.  Don't get me wrong.  I am LOVING what I'm doing.  This is what I'm supposed to do, who I'm meant to be (just wish I'd figured it out 30 years ago).  But it's hard.  And while I'm working on how to help others, how to help them process the difficult things in their lives, I'm realizing that today, right now, I'm not processing.  I'm shoving it down, trying to ignore it, and trying to write a paper on racism.

So there I am.  My friend is gone.  My son is struggling.  I spent the whole day at the hospital which is just EXHAUSTING, and now I'm need to set that aside until "later" to process.  Except that I decided I couldn't do that.  So here I am, writing, processing, untangling the knotted up threads in my mind.  And you, if you've gotten this far, have a front-row seat to my insanity.

And maybe now I'll be able to focus a little more, and maybe even get some sleep tonight before it starts all over again tomorrow.  I love you, Traci.  I hope I can someday be like you and like Aaron.

“If there ever comes a day when we can’t be together, keep me in your heart,
I’ll stay there forever.”
—Winnie the Pooh
Posted by CompatibleWithJoy at 10:36 PM