And Then There Were Two... 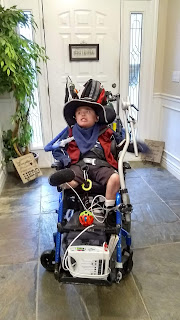 Yesterday, Joseph moved out to go back to school.  We're down to two.  TWO.  Not quite sure how this happened but it did.  It's Michael and Aaron.  Just two at home.  (Plus two dogs, which is almost like two toddlers, but whatever.)

And Michael is a sophomore and playing football, and Aaron is in 6th grade.  I just started my social work master's program.  Michael and Aaron both seem to be enjoying school, I'm loving it!  Totally overwhelmed and feeling like I know nothing, but it's fascinating.  I've been assigned to two grade schools for my practicum and love getting to know the kids and staff.

In the month (plus) since I wrote, Aaron has kinda struggled.

Anyone remember what an ear infection feels like?  That hot needle poking into the eardrum?  The electric shock you get every time you swallow, or the throbbing pain when you like down?  Yeah, the ears... 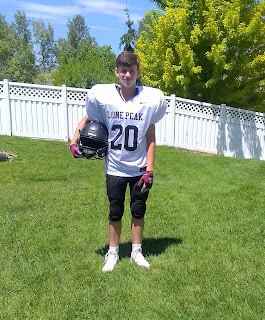 Anyway, the beginning of August, we started seeing some drainage from one ear and he wasn't as happy.  A couple other things came up and on the 9th, I made plans to take him in the next day, probably to Primary's but not quite certain.  Aaron decided he was done playing around.  He'd been having a rougher time all evening, needing to be bagged pretty often but able to maintain with that kind of support.  I figured I got off work at 1:30, would try to get a few hours of sleep, and then take him in.  Um, nope!  At 1:35 he took over.  Even bagging him we struggled to maintain 70's saturation.  (Remember, most of us hang out about 96%.).  So plan B (or G or Q?? who knows how many versions by then.) I grabbed the hospital bag, William and the nurse worked on Aaron, and we called 911.

Guys, it's been long enough since we called them that I didn't know them, and they didn't know me!  That's actually kinda a good thing.  I did have to tell them I was riding in the back, within arm's reach of Aaron.  He's complicated enough that they just said, "okay."  Good thing. 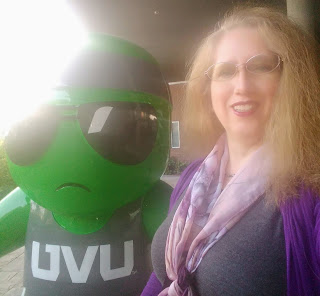 Anyway, due to some pain issues we did x-rays of lungs, hips, legs, etc, ran all sorts of labs.  Everything came back good, except his ears.  Bilateral nasty ear infections.  Bring on the pink stuff.  (I remember taking that, it tasted good!  Too bad his goes through the g-tube.) He starts to get better and we discharge on the 13th

Fast forward ten days.  You know what is significant about ten days?  That's the time it takes to go through the antibiotics.  He's struggling again.  This time I didn't wait for him to take charge and took him to the pediatrician.  New antibiotic, not quite as yummy, but stronger.  He does better again, and is actually happy and laughing for the first time in quite a while.  For about ten days.  Yeah, that again.

In the meantime, school starts and the usually back to school crud starts popping up.  He's doing well, but some in his class are getting sick.  And then we had some difficult things happen mid-week as well.  He struggles more, we start suctioning blood tinged secretions.  And he needs more oxygen.  And some more.  And his nose gets a little snotty... 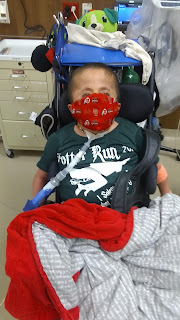 Which brings us here.  To the ER.  Again.  The good news is that his left ear is definitely infected.  Yes again, and yes that's good news.  His chest x-ray looked like him in my opinion.  So now we're waiting on labs, but hopefully we'll be headed home sometime later.  Still waiting on the labs.

But man, this poor kid!  And he can't have tubes because there is no room in the middle ear for them.  The structures in there are either malformed or under developed so not an option.

Through it all, he just maintains. He tries to smile, he watches his movies.  He doesn't sleep well, but again, it hurts to lie down.  He's my hero.  They were trying to get an IV in and he just endured it.  He shook, he grimaced, but as soon as they were done, he was fine.  He didn't fight or cry.  He just did it.  I hope when I grow up, I'm like Aaron.