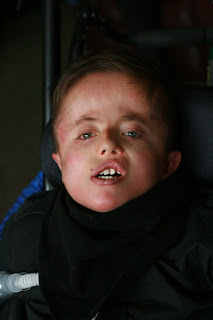 Just over ten years ago, I sat in Aaron's hospital room and Skyped with my parents in China.  We'd just learned that Aaron couldn't breathe on his own.  Our only choices were to trach him or let him die.  In my mind, it really wasn't a choice.

As I explained things, my dad very gently asked me if I would ever be ready to let him go.  I paused for a minute, and then said, "no, I don't think I will be."  He just nodded and said, "that's a good thing to know."

It's been a really rough few week around here.  Really, it's still pretty much the norm for us, but Aaron has had more and more episodes where he's needed significant intervention.  I think there has been one day (Saturday maybe?) where we haven't had to bag him, and most days it's at least a few times.  He's getting his "rescue" med, the one that's only supposed to be used occasionally, around the clock, as often as every three hours.  His digestive system is also not working as well as it should.  Things aren't "moving" they way they're supposed to.  But when you're having trouble with oxygenation, it affects every system.  Kinda funny how they all rely on that good ol' O2.

I really don't know what's going on.  I'm kinda hoping that when we're seen tomorrow, they discover a really nasty ear infection.  That would explain a lot of things.  We've also started giving him Tylenol and Motrin to see if that helps, and it seems to, so maybe...

But I've also spent the last several days doing research again, trying to make sure we're looking at everything.  His awesome ped, Dr. K, called in x-rays and labs yesterday.  The good news is they all look pretty normal.  That's also the bad news.

Tomorrow we have our first in-person trach/vent clinic since the pandemic started.  They offered us tele-health or in-person, but with everything he's got going, I wanted eyes and hands on him.

So I've got my list of questions and ideas.  After getting off work at 1:30 tomorrow morning, we'll be out of here about 6:30 am.  Yeah, not much sleep, but that's the spot they had open for us.  I'm grateful for doctors who will listen and explain things, and I'm really praying that we can come up with a plan that will make him more comfortable.  And breathing better would also be good.  He deserves it.

Here's the latest picture of our family, and probably the last one for a long time.  Jonny and Avanlee leave for Saudi Arabia tomorrow, a year later than they hoped, but still too soon for me.  I'm excited for them, but oh boy, we'll miss them.  And then Andrew leaves in July for a two-year mission for the Church of Jesus Christ of Latter-day Saints.  I keep saying I didn't realize when I was having these babies how much it would pull at my heart strings when they left.  I wouldn't keep them.  They need to go out on their own, but it's definitely bittersweet. 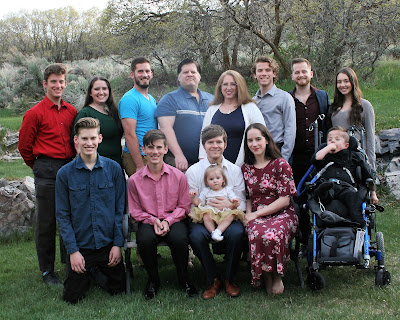 “You do what you can for as long as you can, and when you finally can’t,
you do the next best thing. You back up but you don’t give up.”
―Chuck Yeager

Posted by CompatibleWithJoy at 4:52 PM