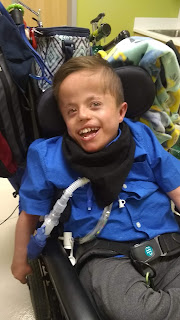 Yesterday was a long, rough day, although Aaron's smiles were out in full force, so there is that.  We spent all morning with the comp care clinic and then were seen again by ENT in his clinic so he could clean out Aaron's ear and get a good look at the ear drum.  No ear infection, labs all looked good, so it probably is disease progression. We have a tiny bit of room to go up on his Ventavis (a heart med), but that’s about it. I did talk them into a bigger trach, 5.5, but it’s going to take time to get it. No one seems to think that will help, but I’m clinging to the idea that it might. This is about where we were 2 years ago when I talked them into a 5 from a 4.5, and it made a world of difference. So hoping...

Really, there are no good answers. 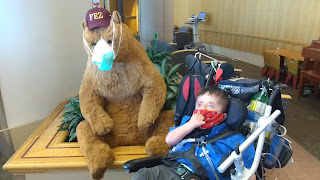 The bright spot of the day was Shriners where they’re putting in for a really sweet motorized wheelchair. He’s just gotten big enough and has enough equipment that it’s getting pretty heavy. It's going to be a really sweet ride. He'll even have a control joy stick that he can use to move the chair. We'll also have an override where we control it. You know, keeping walls intact and all. 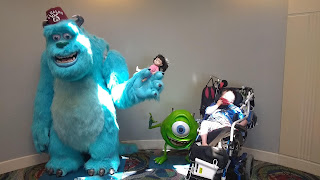 And then the icing on the cake was the trip home. One of my biggest fears is breaking down w/ him in the car. And yep, of course... Fortunately, I had made it to Highland so our awesome LPPD was really helpful. They changed out my flat, but 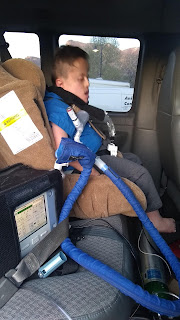 then the donut was pretty low. Tried to make it back to their locked yard for air, but then the tire came off the rim as we pulled in. So ended up having to call AAA for a tow, my son came out to get Aaron and I, and we had to transfer everything to the big van. And now I’m trying to figure out tires, again. (Just last week I replaced my front tires and rear brakes because they were really worn and I didn’t want this exact thing to happen.) It was like Karma said, “oh yeah, you think you can outwit me? Joke’s on you!”
Can I just say it was a rough day?
"Some things in life are too complicated to explain, in any language"
- Haruki Murakami.

Posted by CompatibleWithJoy at 5:30 PM