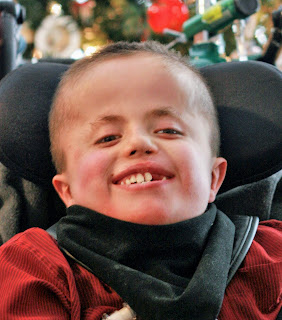 I'm not very good lately at updating.  Sorry.  I tend to keep a lot of these thoughts in my head, or I think I've written, but nope.  Still in my head.

I finally managed to get around to communicating with Aaron's neurologist regarding our weird two weeks the beginning of November.  Actually, it was more of a bury my head in the sand than a too busy kind of thing.

We had that weird 48 hour stay the beginning of November where we thought things might be surgical, but then looked like a viral tummy bug.  But he was just So. Tired!  All. The. Time!!  Trach/vent clinic came up mid-November so I mentioned it there.  He was still really tired. We're talking over a two week period he was sleeping more than twice as much as normal and kinda tired acting even when he was awake.  We (doctors and I) decided to look into some labs.  Were his thyroid meds working well?  That can certainly cause it.  What about vitamin D levels?  They all came back good.

In the back of my brain I'd been wondering about seizures.  No reason.  He wasn't acting that odd.  It was just this darn lethargy.  So once we had the labs back, I decided to give him a dose of Ativan (seizure rescue med) one evening.  Lo and behold, it worked.  He had kinda a strange night where he really didn't sleep, was dazed but would interact if you came into his line of vision.  And the next morning?

Well, apparently we found the reset button.  He was back to his normal, active, playing, goofy self.  I liked that I had my kid back.  I didn't like the implications so much.

In the meantime, we were struggling with his oxygen.  Cardiology had warned me long ago that as his pulmonary hypertension progressed, we'd get to the point where we would have to tolerate lower oxygen saturations.  And we have been.  At one point (several years ago) his sat monitor alarmed if he went below 92, then it was reset to 90.  96 was our ideal, the sweet spot.  I can't even remember when we reset it to 85.  It's been some time.

So with him feeling better and not sleeping so much, work, worry about sats and such, I just really couldn't seem to find the emotional time and energy to connect with neurology about possible sub-clinical seizures.  Especially since I felt like I might be tilting at windmills.

When I finally did, I got an email back increasing his seizure med (which also makes him a little more tired and less interactive, boo!) and telling me to contact a company about a 48 hour video EEG (VEEG).  That was scheduled for two weeks after the med increase.  (Completely coincidental, but also an important time frame.)

In the meantime, Christmas was coming, we were getting out of school, and everything else.  Sats continued to be between 80 and 85 most of the time.

His VEEG was Jan 2-4.  Talk about fun!  He had to keep 21 wires glued to his scalp and two more on his back for two full days.  In all honesty, he was really, really good about it.  I gave him a short haircut and he did have to wear no-nos on his arms because he kept hitting them, but overall, no issue at all.  However, when it was done and I told him it was over, immediately he started pulling at the cap and netting and wires.  Those suckers were coming off!  It did take a lot of nail polish remover (acetone), Dawn dish soap and coconut oil to get it all taken care of.

But here's the thing:  the day before we started the VEEG, his sats started creeping up.  He became less tired.  I was seeing 91, 92 when he was asleep, and the monitor wasn't going off all the time like it was before (yes, even set at 80 we heard it a lot).  And it's continued. This last week, I've put his monitor back up to 85, and it's still not going off much. We even sometimes see 90's when he's awake!

I did some research into his seizure med.  Keppra is a pretty fast acting drug.  It reaches a high state in the blood between an hour and two hours after administered.  However, it takes about two weeks to reach what they call "steady state."  Remember what I said about the time period between the increase and his VEEG?  Yeah, about that long.

So now I'm (impatiently) waiting the report.  We don't see neurology until March (and that's only happening because someone cancelled) so I won't get to talk to the doctor until then.  But I think we have at least some answers.  It looks like he's been seizing and we weren't aware.  Seizures are exhausting, hence the extra sleep and lethargy.  But even if we can't see them, that doesn't mean they're not dangerous.  We need to figure out things.

But at least now, he's happy.  His heart and lungs are working better.  He's getting the oxygen his body needs.

I hope this is the answer we didn't know we were looking for...


"Hope.  It is the only thing stronger than fear."
Suzanne Collins
Posted by CompatibleWithJoy at 12:09 PM