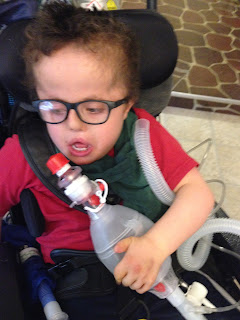 So we spent most of Friday evening in the ER and made it back home.  For three days.

But the good news is that we ran a viral panel on Friday which came back completely clean and the one on Monday was positive.  For rhino.  Yeah, rhino, again.  Kinda like a broken record.

However, since Friday’s was negative, we know this is a new one. People can test positive for rhino for forever.  Okay, well, maybe not forever, but for a very, very long time.  So without Friday’s test, we would have assumed it was still the one from a few weeks ago and it would have been harder to know how to treat him.

He did land back in the PICU, but he’s not nearly as sick as he was before.  He did need the ICU vent for a while, but it was the ICU trilogy, the vent we use at home, and he didn’t ever need 100% oxygen.  We got to our room about 5 am on Tuesday morning and they have just now switched him to the home vent, and it’s looking good. 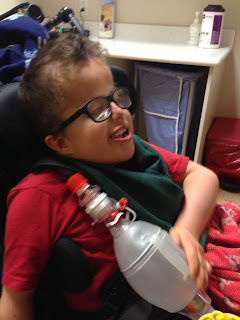 He’s still having occasional seizures, but looking so much better than before.

All in all, it’s not the way I planned to spend spring break, but it is what it is.

“All human plans [are] subject to ruthless revision by Nature, or Fate, or whatever one preferred to call the powers behind the Universe.”
― Arthur C. Clarke
Posted by CompatibleWithJoy at 12:09 PM