Rough Spot and Getting Over It 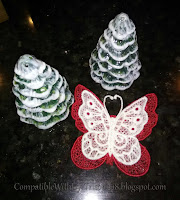 We've had some rough times this week.  It's been busy, and sometimes good, but there were events on Thursday that reminded me just how fragile life is, and how much trust I have to have for him to be able to leave me, and how much training needs to be in place.  And it kicked the PTSD back into high gear.  So even though it was "only" a few hours, the effects on me and my body have lingered.

Thursday afternoon I was home, talking with my husband.  I was actually just getting ready to do something, but I have no idea now what that "something" was.  My cell phone rang and the caller ID said, "Dan Peterson."  I picked it up saying, "oh, this isn't good."  You know, I realized later, they do call me from time to time, and it's usually about a meeting, forms, you know, logistical type things.  But I knew in my gut this wasn't that kind of thing.

The school nurse identified herself and said, "Aaron is having an emergency." 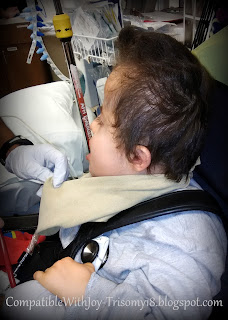 I drove as fast as I could, almost praying for a cop.  There was one, but he was on the other side of the road dealing with a minor fender bender and paid me no mind at all.  And of course, the high school had just let out.  So why is it when I need to hurry, these kids decide to drive the speed limit (sorta)?  I just wanted everyone to get out of my way, and prayed and prayed and prayed.  His school is only five miles away.  It felt more like 50.

I whipped into the first parking space I saw, nowhere close to staying in the lines, and ran into the school and down the hallway.  He was lying on the floor, looking oh so sad, but at least not all gray and blue.  I almost started crying myself.

The trach they took out had a big, ugly blood clot in it.  We'd been suctioning a bit of blood out for the past few days and the thought is that a scab came loose from wherever he'd been bleeding from and blocked the trach.  He had been choking to death.

I took him across the street to the American Fork Hospital just to make sure we weren't missing anything.  His chest x-ray looked just like it always does, his labs were perfect.  And he started laughing at everyone.  So we came on home.

And instead of going to work, or running errands, or anything like that, I stayed close to home on Friday.

But it wasn't all bad this week, and I'm trying to focus on that.

On Monday, Santa came to his school and visited with each child.  They held up a picture board so Aaron could tell Santa what he wanted.  He wants music.  Yep, that's Aaron.  His nurse caught a cute video of them interacting and especially with the events later in the week, it brings tears (happy tears) to my eyes.


My mother sent my Christmas ornament for this year.  It's a butterfly that she made.  Butterflies are my favorite. They symbolize the children who've left us too soon.  Beautiful, fragile, and touching.  It reminds me of the caterpillar that crawls into the cocoon and emerges as something so much more.

And this morning, I'm listening to beautiful relaxing hymns.  I'll go to church, take the Sacrament, and remember that even though sometimes it's hard, sometimes heartbreakingly so, there is hope.  There is life after death.  I know it. And I know that what waits on the other side is so much more than we have here.  But I'm still holding out for more time on this side of things. 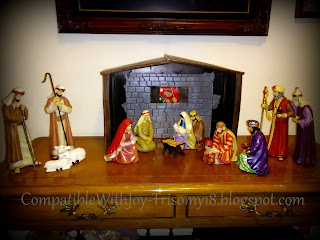 But there is a resurrection, therefore the grave hath no victory, and the sting of death is swallowed up in Christ. He is the light and the life of the world; yea, a light that is endless, that can never be darkened; yea, and also a life which is endless, that there can be no more death.
Mosiah 16:8


Posted by CompatibleWithJoy at 9:33 AM