The Most Wonderful Time of the Year

It must be December because life just sped up again.

We had a ballroom concert and a cub scout service project. 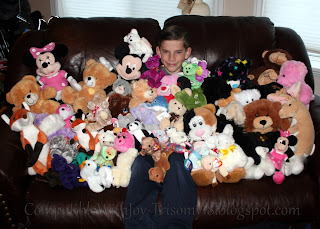 One of Michael's requirements was to come up with, organize, and carry out a service project.  He chose to collect stuffed animals to donate to our local fire department to give to kids they help.  He really got an amazing response!  You should have seen the look on the paramedic's face when he dropped them off.  Having taken more than one ride with a kid in the back of a rig, I can tell you they will be much needed and loved.

We also had our church Christmas party, complete with the big guy in red himself.  Aaron wasn't too sure what to think of him.  It's his seventh Christmas.  Seven!  I still remember sobbing over his cradle on his first Thanksgiving saying I just wanted one Christmas with him.  We almost didn't get that.  He was lifeflighted less than 24 hours later, nearly dying on his way to the hospital.  Seven, such an abundance of blessings.

He's actually not doing as well as we'd like him to.  He's struggled quite a bit this week.

We even went in today for x-rays and labs to make sure he didn't have something nasty that wasn't quite full-blown yet.  Fortunately (I think) he doesn't.  The up side is we're not heading to the hospital.  The down side is we don't know what's going on.

Each day has had some tough moments.  I'm grateful for so much support here in the home.


Without a monster oxygen tank and some nifty devices, he's be in the hospital.  But so far, he'd maintaining at home, and still going out to make memories with us.

"Like Thanksgiving, the spirit of Christmas was never meant to be shut up into a single day."  Robert Flatt


Posted by CompatibleWithJoy at 10:01 PM