One Little Monkey Jumpin' On The Bed 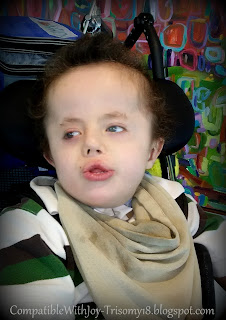 Yesterday, Aaron managed to accomplish something that most children do by the time they're six months old.  He's (almost) six and a half  years.  He fell and bumped his head.

Our little turkey (okay, monkey) rolled over, which is awesome!!  Except he did it on the edge of a table at physical therapy.  And he fell off and bumped his head.  And yep, mama called the doctor, and both mama and doctor figured he's probably just fine.  But the doctor (and principal, and everyone else) said, no more monkeys by the edge of the table.

The table wasn't very high, only about 18 inches, and they put ice on the bump right away.  In fact, by the time he got home from school, I couldn't even tell it was there. 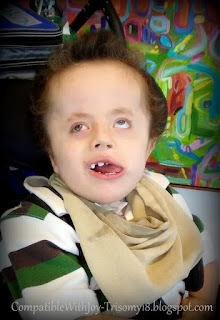 And his brothers have gotten a real kick out of telling him, "no more monkeys jumping on the bed."  Hopefully, they're also taking their own advice.  And really, compared to over the years, this has been pretty minor.  We've had chipped teeth, broken bones and numerous bruises.   I think we've got this. 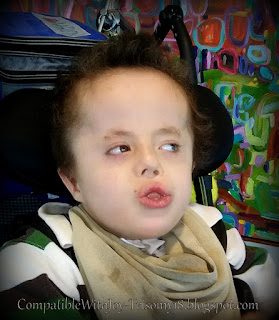 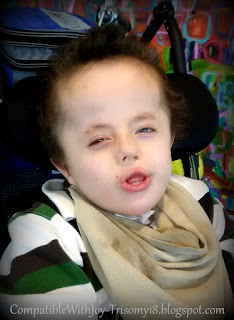 In other news, he's started another new medication, but we were able to stop an old one. The new one is once a day and the old was twice a day, so we're down one dosing.  Yea!!

It'll be up to 12 weeks before we really see a difference, but he's doing quite well.  He's even back to breathing on his own for a few hours every day.  I apologize for not updating more, but typing is rough when you try to use one hand.  It's hard enough to keep up with my thoughts with two hands. Using one really bogs me down.

In the meantime, he's back to singing songs and telling us what's what (so to speak).  He's back in school and loving it, except the bumpy parts.  Today his school nurse couldn't be here, so he went up to the hospital for some meetings with me.  I tried to get some pictures, but he was playing the "won't look at the camera" game.  I think he almost won.

"Mix a little foolishness with your serious plans.
It is lovely to be silly at the right moment."
Horace


Posted by CompatibleWithJoy at 3:40 PM