He's Sick, We're Back (I Think We've Sung this Song Before)

Sunday, Aaron did "okay."  Okay as in, we didn't go anywhere and only bagged him three times, but not in quick succession.  He even made it through the night Sunday night, although I packed the bags and told the kids I gave us a 50% chance of being there in the morning.

Monday morning I managed to get a couple errands run, some files for the office done, and a letter written to Jonathan.

And Aaron decided he'd had enough.  We were maxed out on the oxygen, but we had been on Sunday, too.  I was hoping that if I bagged him and popped his lungs open a little bit (like I did the day before) we might be okay.  But just to make sure, I put in a call to our trach whisperer to check my thinking.

She wasn't impressed.  She gave me an hour to get him down at least a little bit, and if not, we needed to be headed her way, in an ambulance.

Aaron must have heard us talking and decided to not make anyone wait.  I called her back 15 minutes later, as I was bagging again, and told her this was her courtesy call and we were headed up.

Yep, we're back.  And probably for a while.

One friend suggested that rhino was getting old and next time he should focus on catching an elephant instead.  Made me giggle.

Anyway, apparently we haven't even hit bottom yet.  We're on day three, and usually it's at its worst somewhere between day three and day five.  He's in the PICU, resting a LOT, and pretty miserable most of the time.

He's also on increased ventilator settings on the PICU vent.  For those who know what it means, we've increased his PEEP from 10 to 14.  For those who don't, let's just say, it's some pretty significant support.

But we'll make it through.  Tincture of Time and all that.  And he still does have some smiles in him.

And those vent trials?  Yeah, those things that are now on hold for a while?  They've done a lot of good anyway. 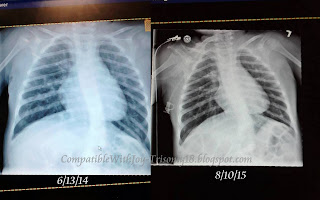 Here's a couple of x-rays.  The one on the left is from just over a year ago when he came in with a bad asthma attack, but after the attack is over.  The one on the left is yesterday.  In these pictures, black (other than the heart, ribs, etc) is good.  Cloudy white is not so good.  We're thinking that yesterday's x-ray is looking pretty darn good.  They also repeated one this morning because of the increased PEEP, and it looked almost identical to yesterday's.

So when we finally kick this thing to the curb and get back, we'll start over again.  Probably not at the very beginning, but we'll figure that out when the time comes.

So here's to sleeping, breathing, and working through things.  It won't be quick, but we'll get there.


Sleep is that golden chain that ties health and our bodies together.
Thomas Dekker
Posted by CompatibleWithJoy at 11:22 AM