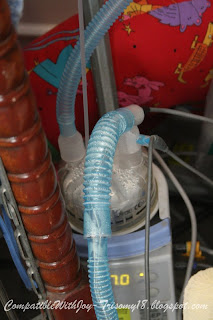 Aaron's humidifier quit working late last night.  He has one because his trach bypasses his nose.  Now, I know when we have a cold or sinus issues, we'd like to ditch ours, too.  But really, that little thing on your face plays a pretty important part in your breathing.  It filters, heats and humidifies the air before it hits your lungs.  And believe me, you're grateful for it.

So, in between the vent and Aaron is a heated humidifier.  Except last night, it wasn't heating.  And not being heated also means it doesn't pick up as much humidity.  Short term, it's not that big a deal.  But long term, not so good.  That was one of our challenges in going to Arizona.  He had a filter that went on the circuit which helped to trap the heat and humidity already in his body, but we still had to add more with sterile saline over the 14 hour trip.  And on the way down, I didn't do enough and he was junky and unhappy for the next several hours after we got there.

I decided not to call late at night and just wait for morning.  We'd watch and he would be getting some from the cool water, just not as much as normal.  This morning I got someone who I guess isn't around enough to pick up on some things.

"Hi, my son's humidifier for his ventilator isn't working."

Okay, now I'm thinking, you're part of a durable medical equipment company.  And you're obviously at work on the weekend, because a lot of your equipment is things like ventilators, humidifiers, feeding pumps, etc.  It's not a Monday through Friday, 9-5 work environment.  It's not like my sprinkler system won't turn on.  It really is a life and death matter.

So I told her, "You have an RT (respiratory therapist) who is on call.  I need to speak to him."  Fortunately, contacting him was within her skill set.  I'm just grateful that I knew who I needed and what I needed and I didn't let her convince me to just "tough it out."

Now it's been over 12 hours since it quit working and Aaron's going higher on his oxygen and getting junkier.  Secretions are thicker because of lack of humidity.  And I'm still sitting here waiting for him to show up.  But at least he said he was coming...

Posted by CompatibleWithJoy at 11:54 AM