Aaron dancing to "4 Hugs a Day"


I'm afraid this post may be a bit disjointed.  But if I wait until all the brain cells come together, you may never hear from me again.

The last couple of weeks, another T18 mom has been having some fun.  She asked us to figure out what our child was going to be when they grew up.  We have future servicemen, models, sports stars, and so on.  Aaron is going to be a marriage and family therapist.  He's going to get everyone together in one room and just love them.  They'll feel so good that they'll be willing to work things out the best way.

This week, she asked for our kid's superhero name.  Aaron is the Great American Grinner!  His smile is so contagious!  You just can't help but grin along.  And really, why wouldn't you want to anyway?

Aaron is doing well.  He had a fairly quiet week, until Friday, that is.  And it was still quiet from a medical standpoint, just not an auditory one.  I think the flu has made its way through the family, and hopefully out the door, without stopping in Aaron's room.  The coughs and sneezes have started in other places in the house, but hopefully those won't find his doorway, either.  On Friday, we went for labs.  He did NOT like that.  Can't say that I blame him.  But usually, once the needle is out, it's all over.  Not this time. He cried.  And cried.  And cried some more.  And it was AUDIBLE!  I hate that he was sad, but when you can't hear your baby cry, to hear it again, somehow, that's good, too.  And it wasn't this wheezing of air escaping.  There were actually crying TONES in there.

But then, that made me think.  See, he's been a little (not much) wonky on his oxygen.  And the secretions we've been pulling out were more copious and thicker.  So I started checking his ventilator numbers.  Yep, his air leak was probably a bit too big, so I inflated the cuff in his trach a little more to force the air further into his lungs before it escaped.  Within an hour or two, I started pulling really thick, nasty stuff out of him.  That continued for about 24 hours and then subsided.  I don't think we were actually getting the air all the way down into his lungs.  And I think that may not bode real well for trying to come off the ventilator in the spring.  But we'll see. 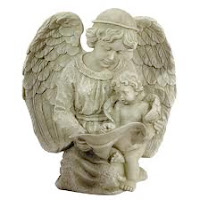 It is winter, in spite of the fact that the snow seems to have missed the place with "the greatest snow on earth."  And with winter comes RSV.  Early, early this morning, our T18 family lost another little angel.  Just turned three years old, she grew her wings and went back home.  A couple more have also gone home, and some others are fighting hard.  I know it's not logical, but often, when I first hear of one of ours going home, my first reaction is, "but wait, let's try this first."  And "isn't there something more they can do?"  I know that doesn't make sense, but I want to go back, even an hour or two, and try something different.


My prayers go out to those families.  I hope they can feel the comfort.  I ache for them.
Posted by CompatibleWithJoy at 11:28 AM