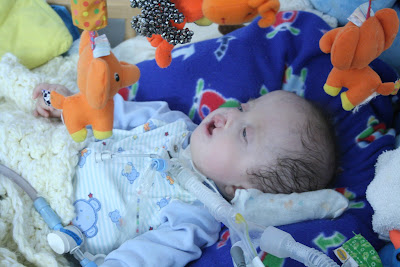 I’m hoping that writing about this will help clear the images, because I'd really like them out of my head.
About a week and a half ago, Aaron started using a bit more oxygen.  A couple days later, secretions got thicker and he started sneezing and coughing.  So we caught a cold.  We increased CPT, changed the trach (subject of “I Hate Rollarcoasters”), and just tried to let him ride it out.  And it looked like he did.  Sunday, early morning, was really the end.  And I thought it would be smooth sailing.  Monday morning was his hearing test which, as an outing goes, went well.  No hitches or glitches.  And Tuesday was pretty good too, except that he didn’t get to go to the baseball game because it got too windy and cold.
Then there was yesterday.  I’d really like to be able to forget it.  And maybe my mind is, because some of the details are a little foggy.  I can’t remember if I had just suctioned him or not.  I think I had a few minutes earlier and had just finished listening to his lungs, which did not impress me.  I remember trying to decide what exactly I was hearing, because it was different than normal lungs (okay, his normal) and it didn’t sound like plugging either.  Then he desatted.  Big time.  With capitol letters.  DESAT!  We’re talking 33 percent was the bottom of it.  With a good wave form.  Appearance was ugly.   I mean, he’s a cute kid, but this was not pretty!  He was still, not struggling at all, and a purple/blue color, but still awake.  I’m sure it was just a second or two, but it felt like forever.
I froze initially.  I had already increased oxygen a little bit because of the suction.  I tried to figure out, if I screamed, would William hear and come running?  Did I dare run for the phone to call 911?  Did I want to grab the oxygen tank, take him off the ventilator, and start bagging him with the 100% oxygen?  Since all of those took longer than I wanted (like, I really wanted to go back in time and have them already done), I reached behind and cranked his oxygen up all the way to 10 liters/minute.  And held my breath for about another second.  He started coming up.  It wasn’t real fast, but of course, every second felt like an eternity.  He hit 44, then 48, then back to 42, then bounced between 50’s and 60’s, then low 80’s.  Finally we hit mid-90’s again.  Really, the whole thing probably took less than five minutes.  But it was a very long five minutes.
It must have been just before about 9 o’clock, because I decided to take him to American Fork Hospital ER to get x-rays along with the labs that had already been ordered.  But first I put in a call to Dr. Knorr.  He recommended that we either go up to Primary’s main campus if I thought he needed admitting, or to Riverton’s campus for x-rays and labs so a pediatric radiologist could read the x-rays.  In spite of all the excitement, I didn’t really feel we needed to be in-patient.  But I wasn’t sure either.  So we went to Riverton.  Turns out that while the x-rays looked good, and most of his labs looked good, his white blood count was really high.  When Dr. Knorr called me with the results, his first question was, “How’s he doing?  How’s he looking?”  Fortunately, while his secretions were worse, he was processing oxygen much better than he had been.  So we decided to get a super antibiotic on board to see if we could head this off at the pass.  Otherwise, it was up to the hospital for us.
Anyway, today, he’s still pretty tired and lethargic, but I think he’s just worn out.  Looks like his old enemy, pseudomonas tracheitis again.  But the Cipro is kicking in.  He’s using less oxygen and secretions are becoming more normal.  Hopefully, this time we’ve dodged the admit.  Stay tuned for more excitement...

Posted by CompatibleWithJoy at 12:09 PM