So far so good.  In my last post, I talked about starting vent trials again.  I'm always a bit nervous about them, you know, that whole "breathing is kinda important" thing.

But he's doing great!  I emailed our trach guru about his sats. He's better OFF the vent than ON, at least until he gets tired.

Her response?  "Who knows what Aaron is doing!!  He's never followed the "rules"!  But we will take the challenge and push him forward!" 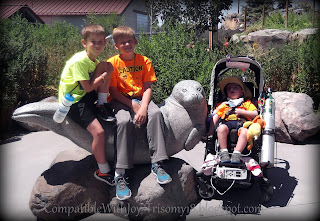 And so we are.  After spending 9 days with an hour in the morning and another in the evening, on Monday I decided to see just what he could do. 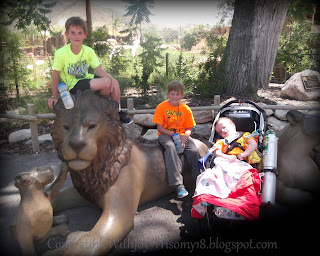 FOUR hours off, followed by five hours on, and another FIVE hours off!!  Yeah, it was a push.  He did great, but was too tired the next day to do much.  Since then, he's been 2-3 hours off at a time, usually twice a day.

He's sleeping a little bit more than usual, but not much.  All his vital signs stay stable or we switch back.

And his lungs have never sounded clearer.

Will he ever be able to totally kick the vent?  Who knows.  But he wasn't "supposed" to live this long either.

So we'll follow his lead, give him some pushes in the right direction, and see where he takes us.

If nothing else, it's sure to be a ride.

“Know the rules well, so you can break them effectively.”
― Dalai Lama XIV

Posted by CompatibleWithJoy at 4:55 PM