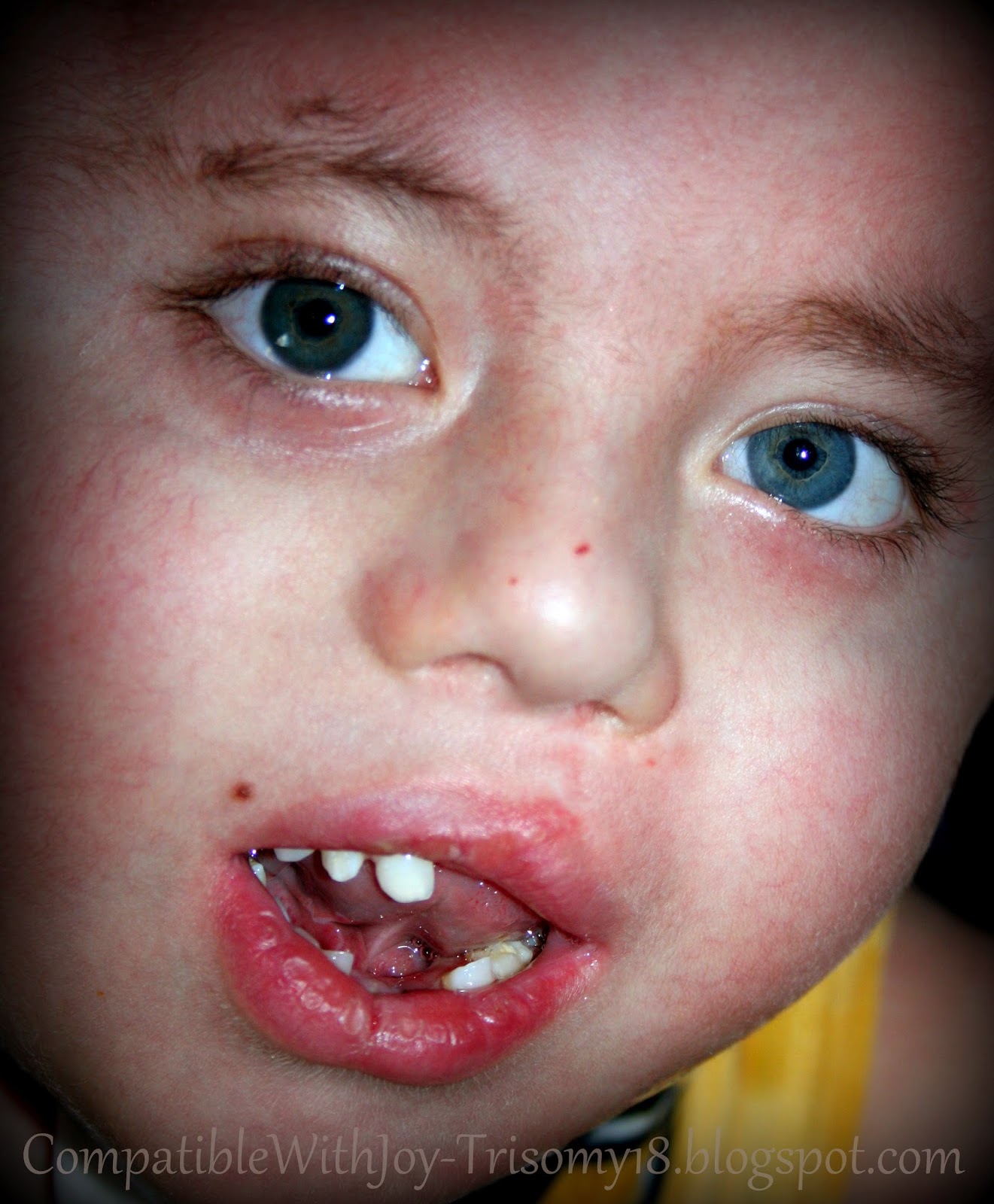 My little guy is growing up.  You know those little things that you sorta know are going to happen with your child?  You don't really think much about them, but it's exciting when they happen.  First lost tooth fits right in there.  But if your child doesn't live long enough to even get his teeth, he won't lose them either.

Aaron lost his first one last September, but I'm not sure I really counted that one.  I mean, the dentist pulled it in the OR.  Does that count?  Maybe.

But he's had a couple loose ones, you know, those cute tiny ones in the front on the bottom. The doc checked them when he was in a week and a half ago, and said, "Yeah, they're loose, but he's got a little while, you'll know when."  (I'm thinking, right, I only knew with my other kids when they brought me the tooth OUTSIDE of their gums.)

And hey, consistency is great, right?  I went in yesterday morning and one was missing!  I was kinda confused as to how it happened without him having an issue.  I mean, from all evidence, he does protect his airway, but a few months ago I tried to give him some cookie crumbs and it was kinda ugly.  He just didn't know what to do with them.  He gagged and choked, and had a pretty rough time.  And those crumbs were a LOT smaller than his tiny tooth.  But nonetheless, the tooth was gone. 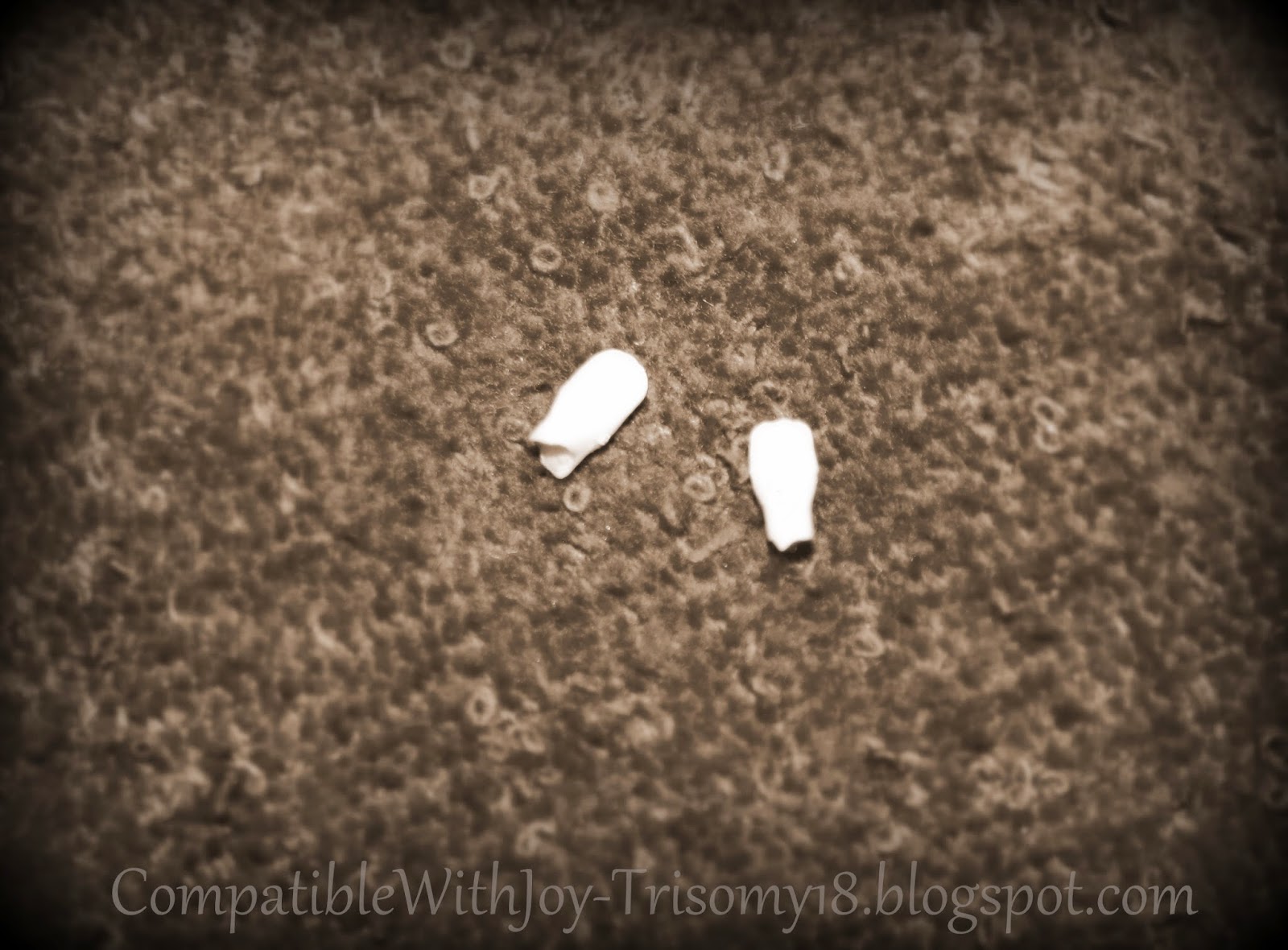 So I figured I'd better try to pull the other one one.  After all, it had been looser than the missing one.  Nope, it was stuck in there pretty good still, so I left it alone and figured I'd try again today.  Well, like his sibs, he apparently wanted to take care of it on his own.  Sometime during the night, he was chewing on one of his blankies, and his nurse noticed that there was a lot of blood.  Yep, he took care of it, again!

Then this morning, when changing his clothes, I found two tiny pearly whites, sitting underneath him in his bed.  So mystery solved.  Somehow, he got them out, and out of his mouth without swallowing them.  Now, if I could only convince the tooth fairy to show up.  (He's kinda been MIA for the past several years, lazy mama.)

Anyway, on other fronts, Aaron is doing REALLY well.  (I do say that with a tiny bit of trepidation.)  He's almost completely off his oral steroids, just a teeny, tiny amount today and tomorrow.  He's also now on his inhaled steroids and is using his frankincense oil lotion.  And he's on ONE TO TWO LITTERS of oxygen.  He has been for several days now.  I honestly can't remember when he's needed so little.  Plus, his heart rate and respiratory rate are lower than we've seen before.  All really good signs.

A couple weeks ago, I had dreams about him dying, then not dying, then in a lot of trouble in some strange hospital and I couldn't find him.  (My husband pointed out that this was my version of the "end of semester I forgot to go to class, it's finals time" dream.  He's right, and it helped to have that pointed out.)  But then it was followed by that awful week. 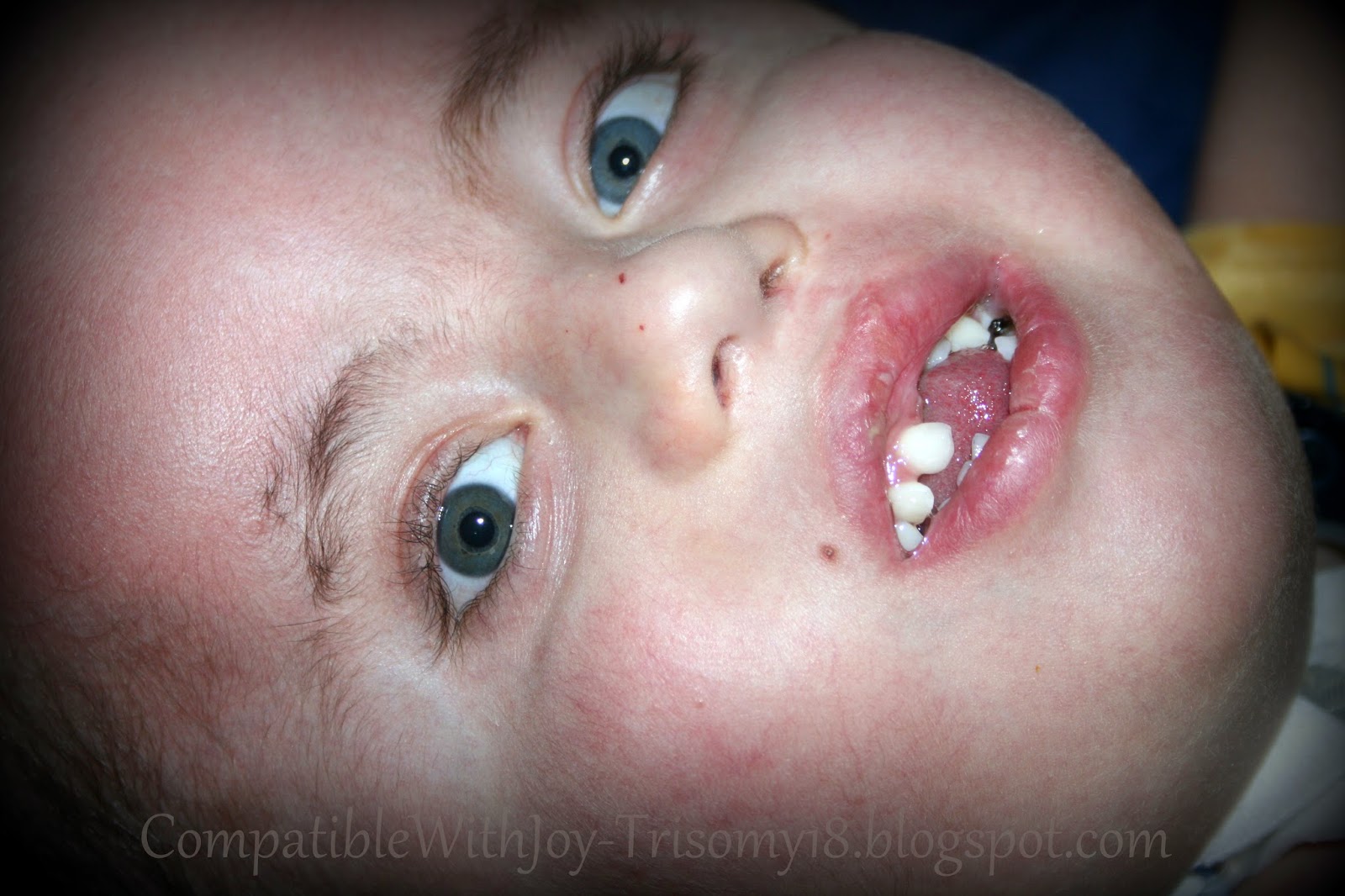 Last night, I had a different dream.  I was carrying Aaron around and I had been for quite a while.  I realized that I probably ought to be heading home, but was a little confused about why I needed to.  Then I realized/remembered, that he wasn't on a vent, and hadn't been on his oxygen for "a while," and while he was looking really good (in my dream), it was probably time to be near his oxygen again.   No, I don't think these dreams were harbingers of things to come, but oh, I sure enjoyed last night's more than the one two weeks ago.

Hope springs eternal.  I'm hopeful that we've got some really good days ahead, time where we can make progress of reducing some of his supports, increasing his heart and lung health.   A pretty different outlook from just a few weeks ago.


that we might see
the might-have-beens
that still might be.
~Robert Brault
Posted by CompatibleWithJoy at 2:22 PM