Just a quick, down and dirty about what we're doing.

Aaron dropped his oxygen sats very quickly, and very low tonight.  Like he hit 41%.  And that was while bagging him.

I was in the other room and he started beeping, and stopped, and started, so I went in.  (As an aside, he'd had labored breathing earlier in the day, and I'd given albuterol about 4 p.m.)  When I got there, he was sad, and his sats were a bit low.  Not awful, but low.  And he was gagging, so he needed his tummy vented.  He dropped a bit more, so I called William to come in so he could vent the tummy while I suctioned.  By the time he got there (a few seconds later) I gave up on the suction idea and was grabbing the bag.  He was about 70%.

He kept dropping.  At 50% I yelled for Jonathan to get me an ambulance.  Can I just tell you, 50% is ugly.  I mean, really, it's ugly, visually.  It's a blue/gray color, not much in the way of lucidity.  Stomach muscles working really hard to suck the air in.  And 41%??  Well, that's even worse.  And it took FOREVER to bring him back up.  We started albuterol through the bag before paramedics got there.

When they arrived, he'd improved.  Not sure how much, I can't remember.  They asked if we wanted to stop at another hospital before heading up here to stabilize him.  Nope, let's just throw and go.  It's telling that this time, they did NOT want the car seat.  If he went south again, it would be easier to work him without the carseat in the way.

On the way up, he was still struggling, still working really hard to breathe.  We'd done a quick trach change just before leaving, HOPING for a nasty plug.  Nope, not really.  There was some "stuff" in the trach, but nothing that should have done what we were dealing with.  We nebulized some more albuterol in the ambulance, and afterwards, he started breathing easier. 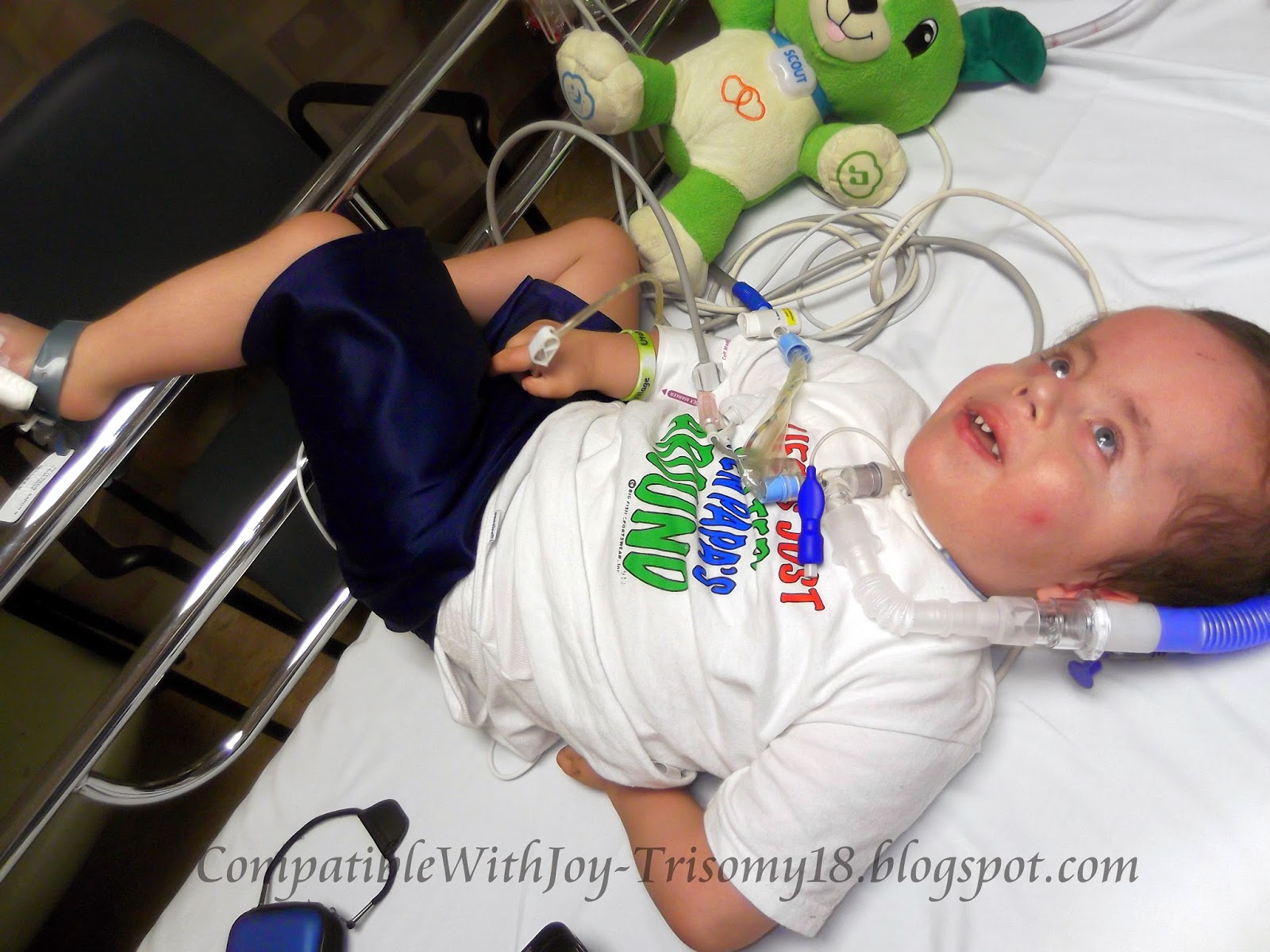 So now?  How's it going?  Well, they've pulled a bunch of labs and we're waiting on x-ray.  Oh, and he's on his home vent settings and all.  And kicking his feet over the side of the bed, and laughing at us.  We're all hoping this was a bad asthma attack.  If so, we may actually be home tomorrow.  That would be nice.

If we are, you're still welcome to stop by.  And if you want to bring a balloon or two to let off, that would be great.  I don't think I'm going to make it out to pick up any.

I'm not even quite sure what's in my hospital bag this time.  Hopefully, we won't be here long enough to really find out.  Stay tuned, it's never dull around here.

“In preparing for battle I have always found that plans are useless,
but planning is indispensable.”
― Dwight D. Eisenhower
Posted by CompatibleWithJoy at 12:12 AM